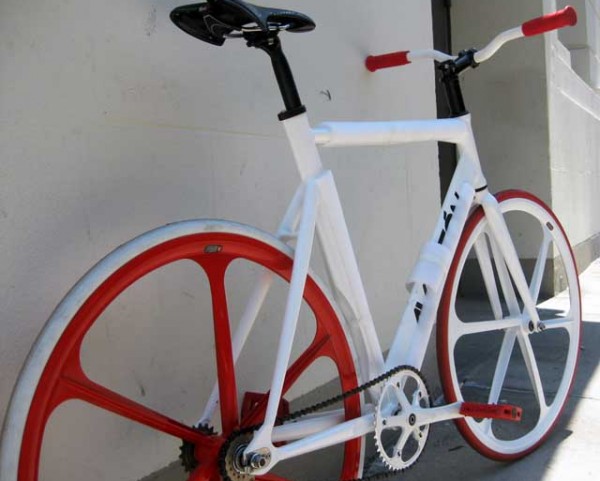 Before you dismiss riding a fixed gear as only a trend, take a look at what traditional riders have to say about the fixed gear. Sheldon Brown died in 2008. He was a bearded old guy and remains one of the most respected men in cycling. His legacy of cycling knowledge exceeds most cyclists today and he wouldn’t ride a bike if it was only considered a trend. Sheldon liked fixed gear bikes. “It feels like an extension of your body to a greater extent than does a freewheel-equipped machine.”  He said of the fixed gear bike.

Front Brake or Not

Some riders add front brakes to their fixed gear bikes which makes them a little more practical and depending on where you live — legal. But adding brakes to a fixed gear bike is considered a direct insult to conformity and functionality. Trying to make it more like a traditional bike seems self-defeating.

You can ride a fixed gear bike safely without brakes once you’re used to it. Putting back-pressure on spinning cranks slows you effectively, just like a brake handle does. But in perspective, or to look at it strictly from a safety standpoint, if you break a chain, a front break can really come in handy.

While the absence of gears might seem impractical, it’s not that bad. Riding a fixed gear bike promotes better pedaling technique and strength. Road racers like them for improving form and a strong rider on a fixed gear can often out-climb a geared bike.

Riding a traditional road bike for fitness can be counterproductive if you succumb to the temptation to pick the most efficient gear and maintaining a heart rate you can sustain over the long haul. Riding a fixed gear bike takes you out of that comfort zone. All effort is pretty much identical. When riding a fixed gear bike, the gear is established and you must choose the effort expended to match the distance. It puts you through paces that you might never experience on a traditional road bike.

Trackstands are the ability to stabilize a bike without moving forward. Since the bike can pedal backwards under force, it makes it possible to keep balanced while stopped. This is useful while waiting for cross traffic for example, and is a demonstration of the skill of the cyclist. It is impressive. Nothing performs better trackstands than a fixed gear bike.

Fixed gear track bikes are designed for the velodrome. Horizontal rear-facing drop-outs, no quick release on wheels, no brakes, drop bars for most events. Steeper geometry than road bikes and handling is twitchy. Tires no wider than 25mm.

Road bike conversion fixie. You can always tell a conversion because the drop outs are not rear-facing. Everything else is much the same as a street fixed gear. This is a good way to experiment with a fixed gear bike if you don’t want to shell out $700-$1000 for a dedicated fixed gear. You can’t race one of these in the velodrome because of the dropouts however.

The benefits of owning a fixed gear bike are undeniable. If you love bikes, no matter what kind, then add one to your stable. You won’t regret it.