When I first started biking, in 1992, a 2.1 inch mountain bike tire was huge. At 13 years old I would settle for whatever I could talk my mom into buying for me. The day I upgraded from a Toys R Us bike to my first real bike was the happiest day of my life. My jet black 21 speed Trek 820 Antelope was the last bike my mom ever bought me; the next one would be on my dime. She was beautiful and quite an upgrade from the Alpine Vista that she replaced. The Antelope had Shimano rapid fire index shifting, quick release wheels and seat post, cantilever brakes and 2.10 inch tires! Oh boy, I was in the money with her. 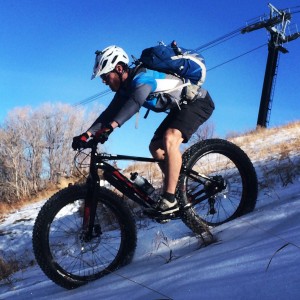 When I was sixteen I drove my truck—that my mom bought me— to the local bike shop. I had dropped out of the 5th grade so by the time I was sixteen I had a full time job and was making enough money to save some for large purchases. I went into the shop and gazed for a good 20 second with the shop employee before selecting the most expensive bike my hard earned $600 could afford. A bright yellow Gary Fischer Big Sur with a Rock Shock Indy front fork; I had graduated to a suspension bike!

After checkout I walked to my truck with my head held high, my new steed was brilliant. I admired her upgrades, V-Brakes, 8 speed cassette, threadless headset and her plush front end. Even the little things seemed amazing to me. She had a blue anodized aluminum cap on her stem that had, “all work and no play is no fun at…” engraved in a circle so you could continuously read it. I loved that.

When I lifter her up into the back of my truck I noticed something that seemed off, her tires were 1.95 inches wide!  What was going on? I marched across the street and into the shop. With fire in my eyes I approached the shop employee and kindly said “So heeeey, I noticed that the tires on that bike are not two tens. What’s up with that?” The guy at the shop looked at me like I was nuts and said “Why would you want such a fat tire?”

Apparently, in 1995 skinny was the new fat—2.10 tires in 1992 were considered fat— everyone wanted a tire with low rolling resistance and so were the days of narrow racing tires and semi-slicks. I would eventually buy a pair of semi-slicks—knobs on the sides and “texture” down the middle—for my Big Sur. They were super fast, till you hit a wet root and went from cyclist to sack of potatoes in 0.2 seconds.

Fast forward 20 years and the ebb and flow of tire size has been like the weak equatorial tides of Trinidad and Tobago, occasionally reaching an extreme of 2.6 or 1.75 inches before returning back to the mean but, a few years ago, a tidal wave hit the bike market.

In 2005, Surly released the Pugsley. The Pugsley was a beast, and the first time most of us ever saw a fat bike in person. They had 3.5 inch tires and would ride over sand and snow better than anything else commercially available. Now, fat bikes had been made and used since the 1980s but in places like Alaska. In the late 2000s they started pooping up here and there but now, they seem to be everywhere.

With Trek and Specialized jumping on board the wagon, cyclists everywhere are getting a chance to take a fatty out for a ride. I personally have always liked a muscular looking bike, something with a little Oomph behind it. I compare it to the likes of track athletes, a decathlete is a good size and well rounded but a shot-putter just seems a bit one dimensional. I just felt like a fatty seemed like a lot of work to ride.

A month ago I was in Park City visiting a long time friend. Stu and I have known each other for about 15 years and we’ve had our fair share of adventures together. Midnight stealth rides up the Mt Washington Auto Road, Tele-Ski Shwacking through the Mahoosucs, and self designed epics with titles like “The Suffering Man” or “Hills of Doom” and this trip would be noteworthy as well.

When I went to visit Stu the plan was to ski tour, but a bad high ankle sprain from and Ass-Clown crashing into me at Ultimate left me in-ski-pacitated. As a guide Stu had access to White Pine Touring center and it’s shop full of goodies, amongst the treasure were a fleet of new fat bikes. They had the Trek Fatty McFatterson with standard 3.5 inch tires and the new Specialized McFatsinyourmouth with massive 4.6 inch tires. I figured “what the hell?” might as well jump on the fatty wagon just to say “been there, done that.”

Let me tell you that these things are amazing! 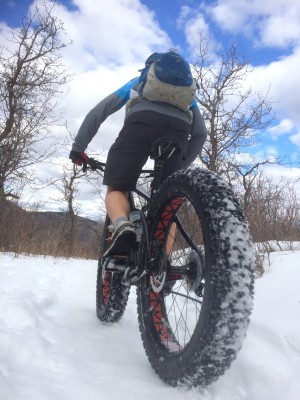 We spent about ten hours on them and rode everything from frozen snow single track with boiler plate to muddy trails to black diamond ski runs with 12 inches of mashed potatoes on them and these bikes were phenomenal. They are quick and agile, they only weigh about 28 pounds and considering the girth, all I have to say is “Damn!” I mean, we rode hard and fast on everything. Powerslides around switch backs, carving loose snow and rolling over anything you could hit.

At then end of the day I could barely walk, and my cheeks hurt from 10 straight hours of grinning like an idiot. If you have the means I highly recommend picking one up.