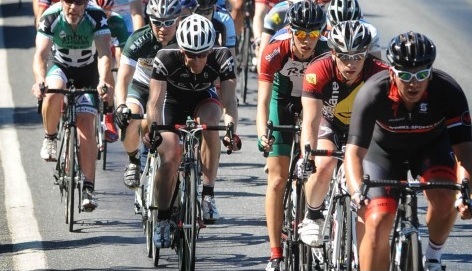 Drafting in cycling is one of the many benefits to riding in a group. You can go faster than you would otherwise on your own with much less effort. You get the rush from the speed as well as the motivation from all the other riders around you. Some riders do nothing but group rides where they consistently get a draft while other riders ride on their own or with one or two others all the time. In terms of what’s more fun; that’s your personal preference. But what will make you a better and faster cyclist? A combination of the two with a healthy dose of group rides where drafting is aplenty.

Drafting in Cycling – What it does Physiologically

You may think that all sitting on a wheel does for you is to allow you to pedal easier. While this is true under certain circumstances, such as sitting on a wheel for an endurance or easy ride, you can also ride much harder while drafting when the group is going full-tilt. You will have more periods of time where you are soft pedaling or coasting but that will then be followed with pedaling harder than you otherwise would. If you have a power meter, your power profile will look like your heart beat profile; spiky up followed by spiky down. If you have been riding on your own a lot and then hit up a local group ride or race, you will be able to tell that your legs aren’t used to the high/low effort. In addition to the spiky profile, you will also most likely be spinning at a higher cadence.

The more you ride in a group the more your muscles are going to get used to this type of riding. In addition to getting used to it, you are also going to generate more speed in your legs. You legs will simply be used to pedaling faster. When riding on your own, this translates to faster speeds. Your muscles adapt to the load that they’re placed under. If you ride at a steady effort all day, then your legs will get really good at that but when you try and go harder, your legs aren’t used to the effort and can’t do it again and again. Building the muscle fibers to be able to handle the up and down efforts will help your cycling all around.

Drafting in Cycling – What it does Psychologically

Drafting in cycling on group rides or in races also plays tricks on your mind. Have you ever gone out and ridden on your own, perhaps to a group ride, and felt like you couldn’t push yourself? And then when you get on a group ride, you feel like superman or superwoman? This is because 90% of riding is mental. Your brain tells your body what to do and your brain tells you how your legs feel. The other people in the group along with the speed and rush, gives your brain an added jolt of adrenaline and epinephrine which gives you an extra edge along with feeling good mentally. This psychological switch when you’re riding in a group is very difficult to simulate on your own. Up-beat music can get you part way but riding with others will always bring out your best performance.

Drafting in Cycling – How often Should you Include it in your Training?

Because drafting in cycling has such a large psychological and psychological affect on your body, it is recommended that you incorporate it into your riding at least once a week and up to three times a week if you are really looking to excel in group rides and races. If you are training more seriously and doing intervals, they have an important place, but in-conjunction with group rides. You are going to push yourself harder and go deeper than you ever would be able to on your own during intervals regardless of how mentally tough you are. Simply when you start to get tired your body no longer wants to push as hard as it’s capable of but on a group ride you will make yourself go cross-eyed even when you’re past being kaput.

While riding on your own can improve metal toughness and the ability to push through on your own, riding in a group brings out what you never knew was there. Riding around other people in such close proximity at high, adrenaline inducing speeds, allows you to push harder than you ever thought possible. Taking advantage of training on your own while in conjunction with group rides at the right times, even if your particular event is done solo, can bring additional benefits to your training.