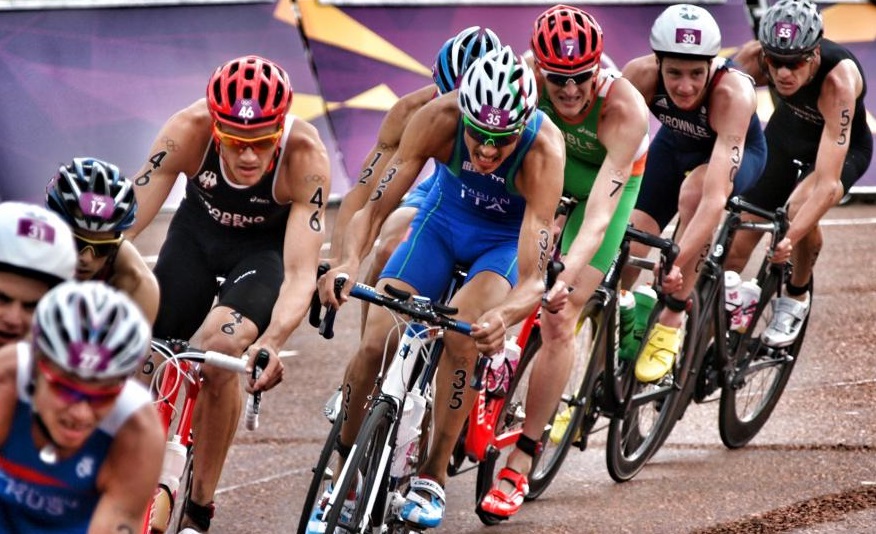 Triathlon and road cycling are two endurance sports in which athletes are required to race on road or triathlon bikes, however the triathlon bike leg differs greatly from a road race event. Road cycling races typically range anywhere from 40 km to 200 km and can occur in a single day, known as a classic, or can last multiple days, known as a tour or stage race.  Triathlon occurs in one day and consists of 3 disciplines: a swim followed immediately by a cycle, and capped off with a run.  The distances of each leg vary depending on the event; the shortest being a sprint, and the longest being the iconic Ironman which is 3.8 km of swimming, 180 km of cycling and 42.2km (a marathon) of running (2.4 miles, 112 miles, and 26.2 miles respectively).  While cycling and triathlon have some similarities there are some key differences which make them both uniquely challenging and rewarding.

Triathlon is a blend of 3 separate sports, and therefore requires a lot of gear.

Training for the cycle portion of triathlon is all about finding the optimal power “sweet spot” and holding it there for as long as possible.  It is a time trial and each athlete will need to discover what pace he or she can hold for the duration of the bike leg without compromising one’s legs too much for the run portion.  The training regimen revolves around long endurance rides with intervals being slightly above or right at threshold for long periods of time. Something like 3×50 minutes at threshold with 5 minutes recovery is common for Ironman athletes.  Triathletes also have 2 other sports to train, so most often they will bike 2-4 times a week and aim to get the most out of each ride since they have to devote time to swimming and running as well.

Since there is only one sport for roadies to train, they typically ride anywhere from 4-7 times a week.  Rides will range from: zone 2 rides being over 3 hours, 1 hour coffee shop recovery rides, to some hard zone 4-5 workouts.  Road racing is full of lulls and hard sharp spikes in power and heart rate, so to mimic this in training riders will do a variety of short efforts with lots of rest to practice high power.

Cycling on the Road AT THE OLYMPICS:

Triathlon at the Olympics follows the format of 1500m swim, 40km cycle, and 10km run.  Both men and women race the same distance.  A major difference of the Olympic-distance triathlon is that it is draft-legal, meaning that competitors can draft and ride in packs on the bike.  This is also true of the World Triathlon Series (WTS) elite triathlon races. Drafting is illegal in long distance triathlons as well as local amateur races.  The triathlon draws huge spectators at the Olympics because there are many view points and the courses are short loop circuits.

The cycle portion of the Olympic Triathlon looked similar to that of the road race except that the packs of riders were far smaller and wearing bathing suits in the triathlon.  At the Olympic Triathlon, it is advantageous for riders to conserve energy and sit in the pack to save their legs for the run portion.  Of course every athlete has their own strengths and it was seen several times this year that an athlete broke away on the bike and gained enough time on the field to stave off the chasers for the win on the run even though her run split was comparatively slower.

In triathlon there are rarely team tactics at play.  Every athlete competes against one another despite being from the same country or the same international training group.  However, this year in the women’s triathlon there were many surges and mind games occurring in run portion.

By comparison, the road race course for cycling at this years Rio Olympics was 237km for the men and 139km for the women.  While both followed circuit loops they were very long, resulting in most spectators going to the finish line.  The race was a single stage which doesn’t favor every rider, especially if a mechanical or illness strikes as there is only one day to race and perform compared to multi-day stage races.

In cycling racing there are teams of 6-9 riders all working together against other teams of riders, with the goal of putting one teammate on the podium.  Many riders have the roll of domestiques where they ride to position their main rider at the front at key points of the race, go back to the team car to get food and water for their leader, and also chase down other team’s riders so their main rider can save enough energy to finish at the front at the end of the race. Teammates will sacrifice their own individual races and results for that of the team.

Another main difference between triathlon and road cycling is the disparity of men’s and women’s media coverage as well as prize money.  In triathlon, not only is the distance of the races the same, but the prize money pay-outs are also the same.  At the elite level of triathlon, races are streamed live online and the women’s and men’s races are typically held at prime viewership hours.  The majority of media coverage however for cycling is for men’s races and usually of grand tours, while women’s races get little to no coverage particularly in North America. Additionally, the prize money is often times substantially lower than that of the men’s races and along with that, salaries are also much lower.