Riding a bike is simple right? It’s something most of us learn to do when we’re children, but all the cycling terms may not come as easily. When you’re first getting into cycling as an adult, you may think you know all there is to know. Swing your leg over the seat and start pedaling. Easy peasey.

However, the problem will arise when you start heading out on group rides, or have to take your bike into the shop. You can only refer to your sprockets as “thingamajigs” so many times before someone shakes their head at you. It may be time to learn the talk if you’re going to walk the walk, so here is your guide to cycling terms for beginners. 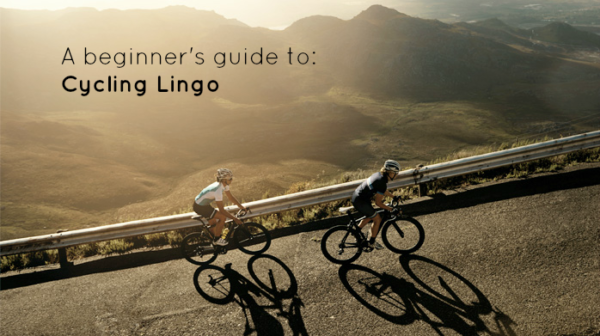 Brakes – They may come in a variety of styles, but the main idea is to keep you from running into cars or other harmful objects. As your one and only stopping force, your brakes are important to your safety on the bike. The left brake typically slows the front tire, so be careful not to just hit that one or you may do an endo (see below).

Chain – The bike chain is the main mechanical driving force of your bike. It is made up of chain links that encircle the gears and make the wheels spin.

Crankset – A part of the larger drivetrain, the crankset is the front set of sprockets closest to the pedals. It is the crank arms (attached to the pedals) that rotate them.

Cassette – The cassette is the set of sprockets on the rear wheel, driven around by the bike chain. The chain moves up and down the cassette as the rider changes gears.

Gears – Ah yes, the magical gears. Most bikes have two sets of gears, one at the rear of the bike (the cassette) and one at the front (crankset). These are what adjust how hard you have to pedal to cross the terrain (smaller gears for climbing and bigger gears for flats).

Cog – As one of the rings in the cassette, a cog is also known as a sprocket or gear. The whole set is called a cassette or cogset.

Fork – The split part of the bicycle that holds the front wheel in place.

Frame – Also known as the backbone of the bicycle, the frame is what brings all the parts together. Usually hollow and made from lightweight material, it is the most important feature to finding the right bike. Ensure the frame fits you properly as it plays into your riding efficiency, posture, and overall comfort on the bike. 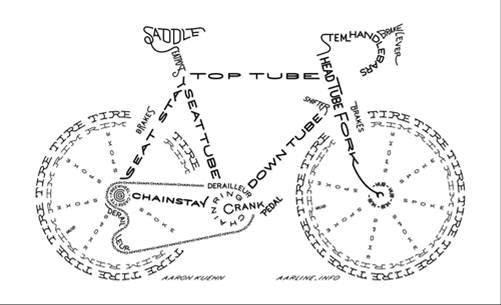 Hub – Where the rotation happens. The hub is the center of a bike wheel that allows you to roll smoothly along your way.

Lube – Lube is what keeps the moving parts of a bicycle, well, moving. Don’t leave home without the lube!

Granny Gear – No offence to your Granny, but this is her go-to gear. As the lowest gear ratio possible, this will be easy spinning on flats, but comes in real handy when it comes to those climbs.

Spokes – You know those metal toothpicks that go from the center of the wheel (or hub) to the edge of your wheel rim? Those are spokes! They are small but mighty, and provide strength and support for your weight on the wheel.

Saddle – No, you’re not going horseback riding (if you are, you’re on the wrong website). The bike saddle, aka the beat seat, is one of the most important factors in your overall comfort on the bike, so choose wisely!

Beater – It may have seen better days, but that doesn’t mean it’s seen its last mile. Beater bikes are often used for commuting, or when you need an excuse on Strava for your embarrassingly slow time. “I was on my beater!”

Fixie – Aka fixed gear, a fixie is a bike with just one gear. That’s right, one gear. Oh, and they often don’t have brakes or the ability to freewheel, which means whenever the bike is moving, so are the pedals.

Tubeless – The name pretty much spells it out for you. Tubeless tires don’t have the inner tube that the clincher set up has, and instead the tire is mounted tightly to the rim using the combination of pressure and liquid sealant. The plus side is – no pinch flats!

Tubular – An almost entirely race specific tire option, tubular tires are glued to a V-shaped rim. They are ultra light, but a absolute pain to fix. Most racers choose to replace the entire wheel rather than attempt mending.

Clincher – The classic tire design that consists of a U-shaped rim and open tire casing with a replaceable inner tube inside. 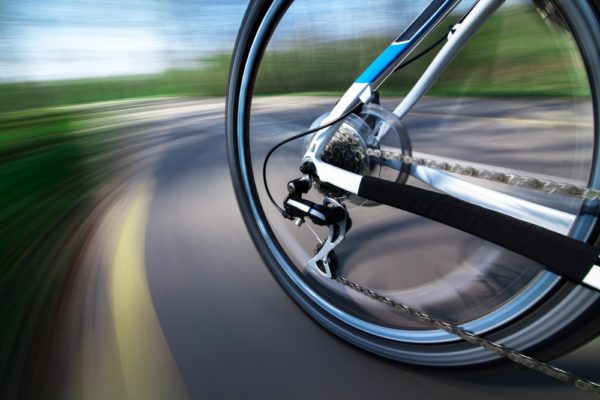 Presta – A style of valve often referred to as the “French valve” that is most common on high pressure road bike inner tubes. It’s made up of an outer valve stem and an inner valve body.

Schrader – Presta’s arch nemesis, the Schrader or “American valve” is a pneumatic tire valve that’s found on most tires (including cars).

PSI – Pounds per square inch, PSI is the amount of air pressure in the tire. Be sure to check out the manufacturer’s suggested PSI before pumping up your tires!

Flat – A good way to ruin a ride if you aren’t prepared, a flat is usually a relatively easy fix. They happen to the best of us, so be sure to have an extra tube (if you have clincher tires) and a hand pump with you at all times.

Pinch Flat – The bane of clincher tires, pinch flats happen when the tube inside the tire gets stuck between the outer rubber tire and the rim. These punctures happen most often when running lower tire pressure. 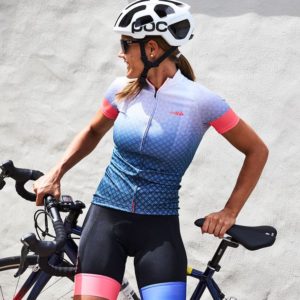 Clipless – Counterintuitive to their name, clipless pedals consist of a cycling shoe with a cleat that “clicks” into the pedal. The name comes from the older toe clip model, which had a little cage that went over your toes, so compared to that, they are clipless. They allow for better power transfer and pedaling efficiency.

Kit – The whole cycling outfit, a kit consists of the jersey, shorts, bib, and the socks in some cases. The more you match, the faster you are…right?

Jersey – Cycling specific jerseys are usually made from a sweat wicking material, have a zip up front, and pockets in the back for all your energy gels.

Pannier – A pannier is a bag that you attach to your bike to carry your gear while commuting or bike touring.

Bibs – Suspenders never went away in the cycling world. Bibs are cycling shorts that have a bib (like overalls) rather than a waistband. The appeal – look awesome and eliminate the chance of waistband chaffing in the bent over cycling position.

Chamois (or shammy) – You’re going to want to practice the pronunciation here, because you definitely don’t want to say it wrong (rooky mistake). It’s said “sham-wah,” and refers to the lovely pad in the seat of cycling shorts that literally saves your ass. It may sounds gross, but you also don’t want to wear underwear with a chamois as they can cause chafing.

Lid – Your most important piece of gear, don’t leave home without your lid (aka helmet).

Attack – Sounds aggressive, and it usually is. Attacking it a sudden attempt to pull away from a rider or group. If you go for it, you better mean it.

Bonk – We’ve all heard of hitting the wall, when you have no energy left due to a very real glycogen depletion. The dreaded bonk comes in the form of muscle cramping, mental fogginess, or the physical inability to go any further.

Cadence – You’re going to hear this one a lot. Cadence refers to the number of revolutions per minute or pedal rate. There’s no magical number (the jury is still out), but generally speaking stronger riders will be more efficient at a higher cadence.

Roadie – Your new nickname! A roadie refers to a dedicated and awesome road cyclist. 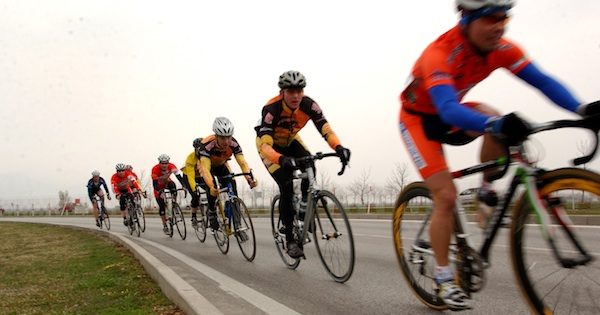 Chasers – We’re not talking about the chaser you’ll find at a bar. Chasers are riders in a race that sprint away in pursuit of the lead rider.

Drafting – Cycling close behind the rider ahead of you to block the wind, reducing your energy output by up to 30 percent. Just be sure to take your turn in the front.

Endo – That moment when you flip over your handlebars. Ouch.

LSD – Not the drug! LSD stands for “long slow distance” and accounts for those endurance building rides where you spend hours in the saddle at a consistent aerobic pace.

Hammer – Hammer hard! Hammering is pedaling hard on the big gears, offering the greatest resistance and packing the most power. Get ready for the burn.

Road rash – Unfortunately, skin + road = road rash. It is the scrapes and bruises that you get from a tumble onto a paved or dirt road. Yes, you’ll look hardcore, but it’s also extremely painful.

RPM – Rotations per minute, your RPMs measure your pedaling rate (aka cadence).

Pull – Taking your turn at the front of a line of riders so they can draft behind you is to “take a pull.” It is a tactic used by groups for each rider to take a turn, switching out often for maximum efficiency, especially when there’s a strong headwind.

Watt – The unit of measurement for power, this is how much strength your putting into every part of a pedal rotation. The more efficient your pedaling and the stronger your are, the greater the power or wattage.

Bunnyhop – Probably the first trick you learned on your bike, the bunny hop is the classic jump and lift with your bike to hop an obstacle or curb. 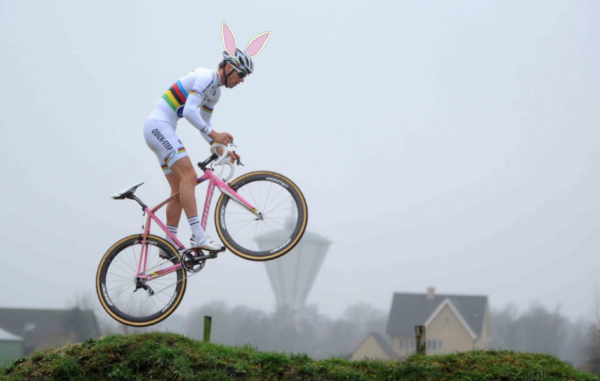 Century – A 100 mile (or kilometer) race or ride that are very popular in the cycling world.

Grand Tour – Have you heard of the Tour de France? Well, the epic race through France is one of three Grand Tours, the other two being the Giro d’Italia and Vuelta a España. They are all three weeks in length, and involve back-to-back days totalling over 2,000 miles or 3,000 kms.

Time Trial – A race against the clock, a time trial is often a staggered sprint race.