There was a time when you thought 50 meant the establishment, your parents or your boss. Fifty was over the hill, with one foot in the grave. But middle aged cyclists are routinely knocking off more centuries with little or no attention to age.

The older generation has realized there’s something addictive and healthful, both mentally and physically — about cycling. Statistics prove that cyclists who take up cycling in mid-life are more likely to stick with the sport than younger riders.

A Class by Itself

The Race Across America is a grueling, transcontinental solo bicycle race. A good percentage of RAAM riders are in their 50s and 60s, and outpacing younger riders. For example; Peter Lekisch, 60-years old, finished the RAAM in 12 days and 20 hours.

Biking has become a passion for cyclists over 50. The need for glasses, slightly graying hair — or loss of it, and few more wrinkles is insignificant. The things that matter most, cardiovascular, lungs and circulatory, or possible issues with hips and joints, can be addressed easily enough by a doctor who can make recommendations for training or recreational riding.

The mass of fast-twitch muscle fibers needed to produce power is greatest during your 30s. Studies have shown a decline in power of at least one per cent per year for both men and women. But there’s a trade off — slow-twitch muscles, the kind that give you endurance, are more plentiful at 50. The demographic of long-distance riders is continuing to favor older riders because of this distinction.

It’s not wise to blast off the line like you were racing. Warming up the first few miles is important. Everyone is different, and you should know by now what it takes for your body to respond. If not, experiment with warms ups to find your own regimen. Simple stretching might be enough, or a slow cruise for the first mile or two might be what you’re looking for. 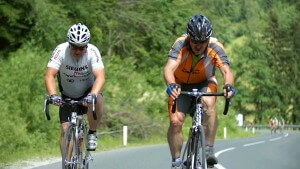 At some point during a ride, you’ll likely feel your lungs and heart find a balance. It might be between 12-to-16 mph, give or take. Serious cyclists call it the anaerobic balance. When you feel it, stick with it for a comfortable cruising speed.

Recovery from a long ride might not be as fast as it was when you were 25. Pushing yourself to the limit breaks down muscle fibers. When the muscles grow back, they’re bigger and stronger. At 50, muscles don’t mend as fast, but they do mend, only slower.

It’s not uncommon during middle-age, to feel down in the dumps, less amorous, or you simply can’t sleep. If you have any of these maladies you’re probably not a cyclist. Cycling affects estrogen and testosterone levels. It’s one thing to say that cycling is a cure-all for these simple health problems, but knocking off a few miles or more each day or as often as you can, is an aid to health issues, and when you feel good, and look good, you feel more attractive.

Older cyclists tend to understand their own responses to training, rather than just blindly knocking out the miles, or following a “one size fit’s all,” training program. If you’re not into training, but instead prefer a more recreational approach, older cyclists are still more likely to listen to what their body is telling them, because it speaks louder — especially in the morning.

Cyclists who prefer to spend their weekends shredding the blacktop rather than puttering around in the garden or on a golf course have much to be happy about. It’s impossible to reverse the arrow of time, but consistent and intelligent cycling minimizes its effects, allowing the older cyclist to maintain or gain fitness as the years tick by.