Whether you’re riding solo or in a group, you need to alert those around you of your intended movements. Like when you’re driving a car and use lights to communicate, cycling hand signals serve as your turn indicators and brake lights. It’s important to know the proper hand signals to ensure both cars and other riders can understand what it is you’re going to do.

Many accidents occur from misunderstandings between cyclists and drivers, and either side can be quick to point a finger of blame. However, it is up to both to know and understand cycling hand signals and the overarching rules of cycling.

The most common hand signal to indicate you are slowing to a stop is to extend your left arm out to the left and angle the forearm vertically down from the elbow. There is some controversy around this, as if you are coming to a sudden stop, it means taking one hand off your brake and handlebar, which could actually prove more dangerous. If you are riding in a group and don’t feel comfortable taking your hand off your bike, yell a courteous “stopping” over your shoulder to warn those riding behind you.

Almost intuitive, to signal a left turn simply extend your left arm out horizontally. Be sure to do to the signal in advance to the turn (like you would in a car), not just when you are actively making the turn. 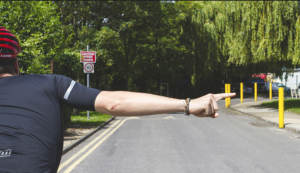 Historically, to signal a right turn you would extend the left arm out, and then up at the elbow. This practice is no longer in use to cyclists, and has been replaced with the simpler right arm straight out horizontally. The Uniform Vehicle Code in the U.S. recognizes both, although it recommends the right arm out approach. State traffic laws generally conform to the UVC, but exceptions may exist.

Quite often cyclists will be moving fast than traffic in dense areas, so be sure to stay about a meter from the curb or well within the bike lane where applicable. Although you do not signal passing on the right, always be alert. This is an issue that can still come to debate in court. Look out for cars backing out of parking spots and driveways, turning left across the road toward you, or turning right into you. The truth is, they probably don’t see you. Never ride on the left side of the road or on sidewalks, as this is both illegal and increases the risk of a collision.

If you are moving a similar speed to traffic, or need to make a left turn in the near future, then be sure to signal and get into a lane. This will put you in the position to properly navigate the intersection with the rest of traffic. Always remember, the same rules apply to cyclists as cars.

Commuting can be the best part of your work day, but make sure you get there and back safely by using these hand signals and staying alert. Never listen to headphones in traffic, and give plenty of warning for each action. For more information on riding safely in a group, check out “Group Ride Etiquette.”