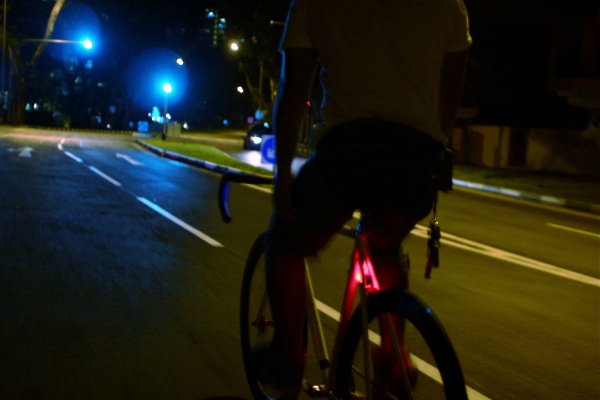 Whether you are a commuter cyclist or an avid cyclist trying to squeeze in a bit more ride time, the time will come that you’ll have to ride at night. When cycling at night, it’s best to be prepared as you are taking on substantial risks that need to be mitigated. Bike riding can be hazardous enough during the day. There are basically two ways you end up cycling at night. The first is that your ride goes long or you’re commuting later, or earlier, than originally planned. The second is that you knew you were going to be riding in the dark and were expecting it. In the first, you just want to safely make it to where you’re headed. In the second, you want the ride to be safe as well as enjoyable without the constant fear of something going wrong.

Cycling At Night – The Unplanned Endeavor

Regardless if you’re commuting or riding for fitness, if your ride is even going to come close to sun down you should be prepared with a light or two. A small tail light that stays on your bike is a good option as it’s small enough that you don’t even know it’s there during the day but bright enough at night for people to actually see you from behind. Something small and sleek such as this will do the trick.  For a headlight, it depends on how likely you are to be caught in the dark. You can go the route of just being visible from the front with a light such as this but not really being able to see where you’re going. If you’re riding in a place with city lights, you might be OK. But if you actually need light to see where your front wheel is headed, you’re going to need something a bit brighter such as this. A good trick is to leave the mount on your handlebars but leave the light in your jersey pocket or saddle bag until you need it.

When you know that you’re going to be riding in the dark you better be prepared from head to handlebar. A few of the dangers that riding at night brings is not being able to see potholes or other obstacles that might throw you from your bike. Spending descent money on a light will save you more than ten-fold on a trip to the emergency room.

When you’re planning to ride at night your are going to want two lights pointing forward. One on your handlebars, the other on your helmet. It’s generally better to have the brighter light on your helmet but since it’s brighter it generally requires a larger battery which is not ideal on your head although some models allow you to place the battery in your jersey pocket. Even if you do get a smaller (dimmer) light however, you are going to want to make sure it’s still marginally bright, about 200 lumens. Anything less than that you’re going to have a hard time seeing wherever your handlebar light isn’t pointed, say when going around corners and your handlebars aren’t yet turned. In addition, being able to point your light directly at motorists to get their attention will help to make sure that they see you.

If you opted for the dimmer helmet light to save weight on your head, you’re going to want to get a brighter handlebar light. You can mount the battery pack on various parts of the bike if it’s not condensed enough to be one unit within the light. Some handlebar lights can get super bright, like a car on high beams bright, which is great on technical trails or bumpy roads. The best thing with these lights is that they have the capability to be that bright if needed but even at half power are pretty freaking bright allowing your battery to last longer than your legs can.

If cycling at night on roads, you are going to want a bright tail light. One that even grabs the attention of the drunk driver on their phone. One such as this. The biggest thing with taillights is to make sure that they are positioned so that they can be seen by a driver behind you. This means that if you have a saddle bag and you place the taillight on your seat post, the driver may not be able to readily see it. In addition, if it’s a pretty directional taillight, meaning it’s super bright in one direction but not so much to the sides, you don’t want to place it on your seat stays where it points up into the air at a 45 degree angle. You want it positioned so it points directly at the drivers behind you.

The Helmet Back Light

The more lights you have the better, particularly when they’re at two different heights from the road. Having a back light on your helmet is an easy way to double the number of lights facing a driver. With both of your back lights flashing, they will gain extra attention from drivers. The Garneau Helmet Light is a super handy light that attaches to the ratchet system on the back of their Garneau helmets but other options exist if you don’t have a Garneau such as this. It’s also a great option for just leaving on your helmet for if you do get caught in the dark.

Other Good Ideas For Cycling At Night

Having head and taillights is the most important part to cycling at night. However, there are a few other things you should include to better your night ride. The first is to wear a cycling cap. The brim on a cycling cap allows you to shield your eyes from the bright lights from oncoming traffic allowing you to still be able to see where you are going as well as to keep your eyes from adjusting back to daylight. The second smart thing to have is clear sunglasses. These will keep the wind, potential debris, and rain if it’s raining, out of your eyes allowing you to see unhindered. Also, wearing something such as a jersey or jacket or a pair of socks that are reflective will help motorists to see you even more, particularly if one of your lights becomes non-functional.

Cycling at night doesn’t have to be dangerous and can open up a whole new world of riding, not to mention the additional time available to actually do it. Be prepared and stay smart and you’ll reap the benefits of cycling at night be it commuting or getting some extra training in.