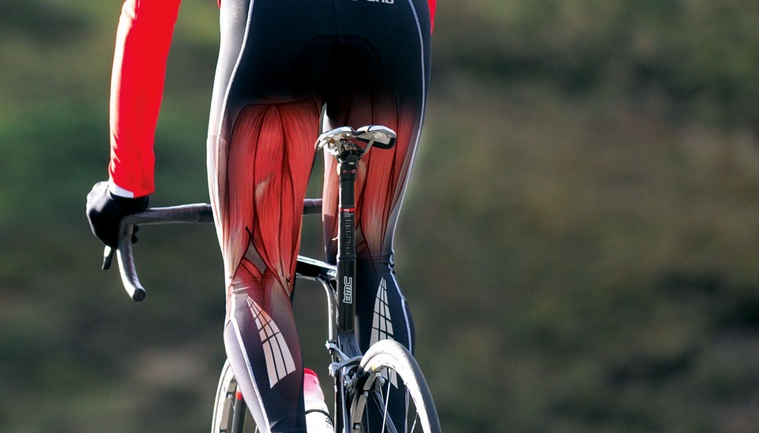 *This Article was contributed by TORQ USA whose products are based around science and natural ingredients for optimal performance. You can find their products in our I Love Bicycling Shop.

Cramping and hydration are two subjects that many people consider to be inevitably linked (like Fish & Chips or Gin&Tonic), but this isn’t necessarily the case. Dehydration can cause cramping for sure, but you might want to look at a few other things first…so lets…

WHAT LEADS TO CRAMPING?

The most commonly overlooked cause of cramping is actually ‘over-exertion’. You could be doing absolutely everything right from a hydration perspective, but it’s just that you’ve asked your body to do more than it’s used to doing. It makes sense really doesn’t it? If you’re calling upon your body to do stuff it’s just not used to doing, it’s going to say ”Look mate, you’ve asked a lot of me in the past, but this is new territory. You must be joking, thus I’m going to punish you with pain…” (queue titanic contraction of hamstrings and calves).

The solution is simply to introduce some harder, more focused riding into your week.  The more riding you do, the higher your cramp threshold will become, so in short, you need to build up your fitness. Bizarrely, if you fuel and hydrate yourself properly (which will be discussed later on in this article), this will allow you to maintain a higher power output on the bike for longer, which in turn will put your muscles under more strain, which can then lead to cramping! I do think it’s very important not to get ‘cramp hang ups’ though, because cramping due to over exertion has to be a good thing. It’s a clear indicator that you’re overloading your muscles and causing adaptation. When I get to the point in my ride/race that I’m getting little twinges of cramp, I know that I’m breaking into new territory and pushing the boundaries. Once I’ve rested up afterwards, I’ll be stronger for it, so the rewards will be sweet. The diagram below shows how short term over-exertion will bring rewards in fitness providing you give your body sufficient time to recover. 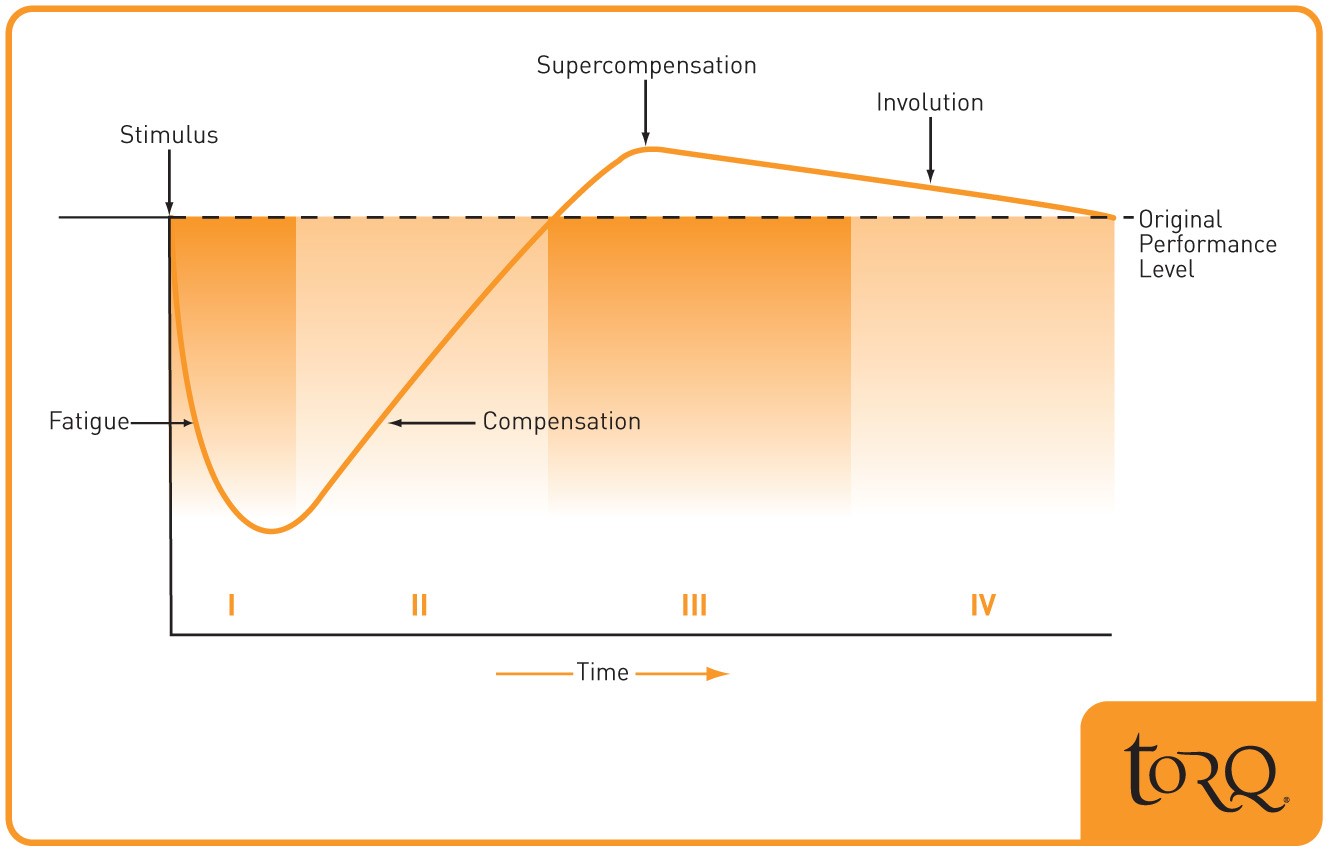 Remember that over-exertion comes in two forms, duration-based and intensity-based. If you can ride for hours, but cramp up on climbs or in races, you need some more intensity in your training, so think about doing some intervals or shorter harder rides. On the flip side, if you’re good at the fast stuff, but cramp on longer rides, you need more endurance, so try to get out and ride for longer (i.e. base riding).

A BIT MORE ON DEHYDRATION…

With this said, dehydration can’t be ignored as a cause of cramping.  Quite simply, if fluid and electrolyte intake doesn’t equal fluid and electrolyte loss, you will start to dehydrate, so you need to address high perspiration rates by putting more fluid and electrolytes back in to your body. Normal table salt is made up of Sodium and Chloride (2 of the electrolytes), but you will also need Magnesium, Potassium and Calcium – 5 ‘core’ electrolytes all together. Electrolytes are necessary elements for muscular contraction, so it doesn’t take a genius to work out that if you start to lose these valuable salts, your hardware’s going to start coughing and spluttering. And no, there is no one magic bullet electrolyte, thus we cannot overstate this, you need to sufficiently maintain adequate levels of all core electrolytes as well as some other nutrients. A bit further into this post we get into electrolytes in more detail.

The diagram below demonstrates the potentially catastrophic effects of dehydration.  For every 1% of bodyweight you lose through dehydration, you get a corresponding 5% drop in performance.  This is a huge performance loss and by way of putting some figures to it, a slightly dehydrated individual who usually kicks out 300 watts at threshold (time trial effort) will drop off to around 285 watts.  Suffice to say that races are won or lost by much smaller differences in power than this.  If dehydration reaches 4-5% of bodyweight, performance drops a whopping 20-30% and a fluid loss of 9-12% can be fatal. 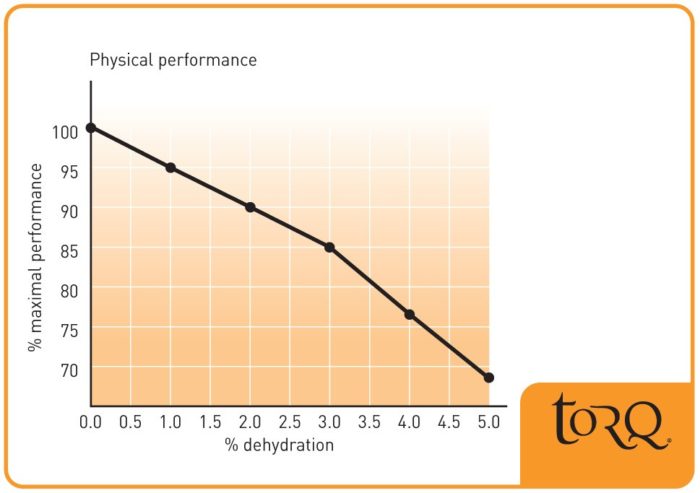 The physiological effects of dehydration are interesting.  The fluid losses cause blood volume to drop and as your blood plasma loses water, it becomes thicker.  This decreases blood pressure, which then reduces blood flow to the muscles and skin.  As less blood reaches the skin, thermoregulatory efficiency (the control of body temperature) is reduced and heat is retained within the body.  The worse the dehydration gets, the more pronounced this cycle becomes.

In order to prevent dehydration, you’ll need to consume fluid, as well as fuel sufficiently. For the purpose of this post, we will focus on the hydration part.  So, how much fluid you take on board will depend entirely on the environmental conditions that you’re exercising in.  If you’re exercising indoors or in dry or hot conditions, you’re going to lose more fluid than in cooler or more humid conditions.  The paradox is that you actually feel like you’re losing more fluid in humid conditions when actually you’re not.  Sweat drips off you, but because evaporation rates are lower, you won’t actually perspire as much and your thermoregulation systems will be much less efficient at driving heat away from your body.  So as not to confuse the matter though, let’s make this assumption: You will perspire more and have greater fluid losses in hot than cold environmental conditions: You will perspire more at higher than lower exercise intensities and finally: You will perspire more in dry than humid environmental conditions.

When perspiration rates are high, you should aim to consume as much fluid as possible.  Pure unadulterated water will not hydrate you as quickly as an energy drink mixed at a 6% concentration though because of the osmolality (potential to diffuse) in the gut.  Sports drinks that are marketed as ‘Isotonic’ are designed for this use, but providing your energy drink is mixed at 6% (60 grams of carbohydrate per liter or 16oz H2O) it will be in balance with your body fluids and will hydrate you rapidly.  Hint hint…check out TORQ Energy…it’s really good at knocking two birds out with one stone…

As an aside, it’s a little known fact that we are actually self-hydrating organisms.  Through our metabolism (oxidative phosphorylation), we actually produce water as a bi-product and according to Wilmore & Costill, authors of ‘Physiology of Sport & Exercise,’ during rest we actually produce 150 to 250ml per day.  In addition to this, a 155lb cyclist will also produce about 150ml of water per hour during intense exercise.  During very cool weather, this would help to explain why one has to get off the bike to have a pee every now and then.  It’s a combination of this canny self-hydrating mechanism and perhaps drinking a little too much for the environmental conditions.

Last and by no means least, lets get a little deeper into electrolytes.  These are dissolved salts that are capable of conducting electricity, so are vital for muscle and neural (nerve) function.  They also play a major roll in maintaining fluid balance within the body.  There are 5 electrolytes: Sodium, Chloride, Potassium, Magnesium and Calcium.  The last one is less important than the other four and by far the most important are the first two.  Having electrolytes in your energy drink has the following benefits:

To summarize, Ed Burkes’s book ‘Serious Cycling’ makes the following recommendations with regard to the amounts of electrolytes that should be present per liter in an energy drink, so check yours (check out details on TORQ Energy hydration & fueling mix here):

Note that TORQ Gels also contain all 5 core electrolytes. Following our TORQ fueling system, you can hydrate and fuel with 2x 500ml bottles of TORQ Energy mix (2 TORQ Units), and 1 TORQ Gel per hour to achieve optimal 90g carbohydrate per hour, as well as be fully topped up on fluids and electrolytes for even the worst conditions.

So, in summary, when perspiration rates are high, do not consume bars or gels, just drink an electrolyte-containing energy drink mixed at 6% carbohydrate – and drink as much as you can (up to a little more than a liter per hour).  This is the quickest way to hydrate and you’ll be fueling yourself adequately by virtue of the fact that you’re consuming significant quantities of this 6% solution.  When perspiration rates are low, drink less or you’ll be taking numerous ‘comfort breaks’ and satisfy your energy needs through more concentrated ‘dryer’ forms of energy like gels and bars.

So, enjoy the heat and stick it to summer. You’ve got this. #Unbonkable

TORQ’s assortment of products to help you achieve optimal performance, not bonk, and stay hydrated for your ride can be purchased by clicking the image below.