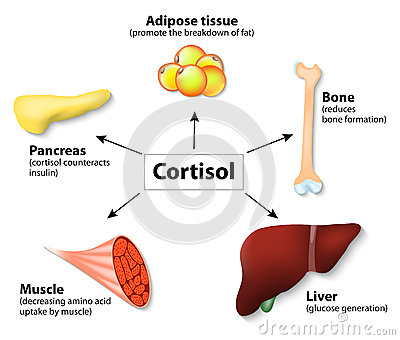 Twenty years ago, the average person didn’t know what cortisol was or what it did. Cortisol, also known as hydrocortisone, is a steroid hormone — a steroid that acts as a hormone. Contemporary cyclists know that cortisol can make a difference in performance and health. Cortisol and cycling can both be influenced with low, normal, and high levels of stress and physical exertion with corresponding positive and negative effects.

Cortisol is released from the adrenal gland. One of the main jobs of cortisol is to increase the glucose concentration in the blood to make more energy readily available to muscles. It increases at the onset of exercise and remains elevated throughout exercise when the muscles create a demand for energy. Cortisol helps to regulate energy by tapping into the body’s fat stores and delivering it to the working muscle and/or breaking down proteins into usable carbohydrates in the liver.

Cortisol levels fluctuate throughout the day and night. It peaks at about 8 AM and reaches it lowest point around 4 AM. While it is important that your body secretes extra cortisol in response to stress or high intensity exercise, it is also important that cortisol levels return to normal.

Often referred to as “the stress hormone“, cortisol influences, regulates, or modulates many of the changes that occur in the body in response to stress and exercise. Acute, high intensity, resistance exercise is associated with increased cortisol levels. A blood test after a high-intensity ride should show high levels of cortisol in your blood.

Stress also occurs from psychological, physiological, and/or physical reasons. When under stress, the body responds by increasing cortisol. Cortisol’s effects on the body are fundamentally beneficial, except when we are subjected to too much stress. Then it can become too much of a good thing.

An elevated cortisol level can indicate overtraining in cyclists. Too much cortisol is also associated with muscle loss and the acquisition of belly fat. High cortisol symptoms include:

Cortisol is a potent anti-inflammatory agent. Inhibiting inflammation allows body tissues to continue receiving their full blood supply. Low cortisol levels can negatively affect a cyclist’s ability to recover from injury. Naturally low cortisol levels could indicate that the rider is suffering from a severe illness.

Cortisol and cycling and how levels are regulated is managed by The Movement for Credible Cycling (MPCC); a voluntary membership organization composed of a number of World Tour and Professional teams. According to the MPCC, when a cyclist returns a test showing low cortisol levels, that rider should not compete for a period of eight days on the grounds that doing so would endanger his or her health.

Chris Horner is a professional cyclists, and previous winner of the Vuelta a Espana, a 22 day race during which cyclists must cover about 2,100 miles with only one or two days of rest in Spain. Horner had to withdraw from the race the year after he wone because of cortisol levels below the threshold stipulated as healthy. Lars Boom is another example, he returned low cortisol levels in an anti-doping test before the Tour De France.

Because some of the highest cortisol surges occur during and after exercise, endurance athletes and cyclists are exposed to more cortisol than even many of the most stressed-out non-athletes.

Cortisol turns from good to bad when chronically produced in excess, such as when a cyclist over-trains. In the over-trained cyclist, high cortisol levels may have negative health effects, but even then high cortisol levels are just one of many imbalances seen in cyclists who work too hard and don’t rest enough.

Sleep is the most important thing when it comes to reducing cortisol and restoring the adrenal glands. Work towards 7-8 hours of uninterrupted sleep between 10pm and 6am and keep a normal sleep schedule if possible.

Decreasing your starch and carbohydrate consumption can help to level cortisol. Eliminate sugar. It’s difficult to do this at first as cortisol increases your desire for sweet food and carbohydrates. When the sweet tooth hits you, satiate it with fruits.

Cyclists typically know their bodies well, and even small changes are noticed right away. As a cyclist, you don’t need to worry too much about cortisol ruining your life. Just train smart, eat right, get enough rest, and your hormones should take care of themselves.