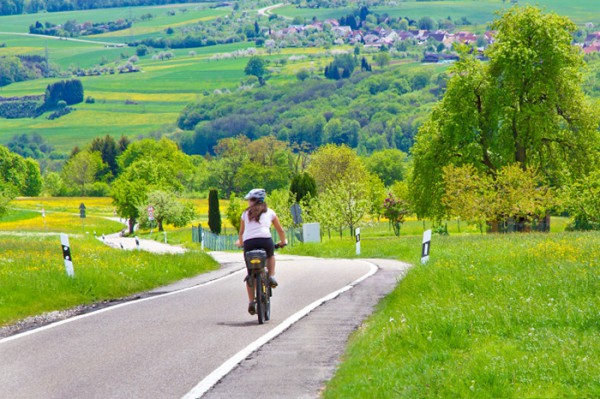 Germany has opened the first 3 miles of a car free bicycle highway that will eventually span over 62 miles. It will remain completely free of motorized vehicles and unlike a bike path, this autobahn-style roadway for bikes has passing lanes, overpasses, underpasses for crossroads and even streetlights. Cyclists won’t have to worry about trucks zooming by or bus lanes and it will be cleared of snow in winter.

The goal is to connect 10 cities in the western portion of Germany, including Duisburg, Bochum, Hamm, and four universities. The highway utilizes abandoned or unused railroad tracks whenever possible. Anyone who’s ever cycled on abandoned railroad beds knows that they’re mostly flat which caters perfectly to cyclists not to mention the bed along with many bridges are already established making the conversion an easy process.

Martin Toennes of the regional development group RVR, who is one of the parties responsible for the development of the bike highway, reports that, “A high population lives within 1.2 miles of the bicycle highway, and will be using sections of it for their daily commutes. With the rise in popularity of electric bicycles,  the new bicycle autobahn will provide a commuting route to over 2 million people, which could result in 50,000 fewer cars on the road every single day.”

Not a Bike Path

The tendency to call it a bike path, no matter how much they resemble traditional highways, is tempting but inaccurate. Most bike paths should be classified as new-model bike lanes. They are too narrow and too frequently encroached upon by cars and pedestrians to be called bike highways. At 13-feet in width with painted lines, the new bike highway should never be confused with a bike path.

What makes Germany’s bike highway so super? Separated lanes, flat surfacing, and superior right-of-way for cyclists are only some of the design components that make this bike highway stand out from your basic bike path. It gives cyclists the ability to travel the entire stretch without stopping for traffic or slowing down for tree root bumps that often slow you down on bike paths. No red lights, no trucks, just clear, smooth cycling.

Another advantage of the car free bicycle highways is obvious. The problem most commuters or leisure cyclists face is fear generated by the fragility of a twenty or thirty pound bicycle facing off with a 2,000-pound car. The bike highway removes the trepidation.

The concept of a completely car free bicycle highway is nothing new. Cycling was huge around the turn of the century. In 1897, a bike toll highway was proposed in Los Angles, California. The fare was set at 10 cents one way and 15 cents round trip. Unfortunately not long after construction began it was neglected and eventually stopped because of the rise of the automobile.

The Rise of the Car Free Bicycle Highway

The car free bicycle highway is believed to have originated in the Netherlands and Denmark. London has declared it will build one to help fight congestion. It’s rapidly catching on in other German cities. Frankfurt is planning an 18 mile highway to Darmstadt. Munich has proposed a 9 mile long route into its northern suburbs. Nuremberg and Berlin are conducting feasibility studies for bicycle highways of their own. But when Germany’s new superhighway is complete, it will stand out as the longest.

Bringing a car free bicycle highway to American cities is gaining traction. For example, Portland, Oregon has a proposed goal of spending $600 million on bicycle infrastructure over the next 20 years, upping the cycling rate to 25% of all trips by 2030.

Most major cities worldwide are attempting to get more people on bikes with cycling numbers increasing in cities ranging from Paris to New York. City planners the world over are envisioning greater numbers of people on bicycles in their long-term projections.

Germany has faced a number of hurdles in financing for the new bike highway. The reasoning for the trouble is unique. In most instances the federal government is responsible for roadworks and waterways but cycling infrastructure falls under the management of local officials.

Martin Toennes of the RVR development group sums it up like this: “Without State support, the project would have no chance. Local governments would have difficulty paying for maintenance, lighting, and snow removal”. A proposal is now in the works to get $196 million from the federal government to fund the entire 100-kilometer route.