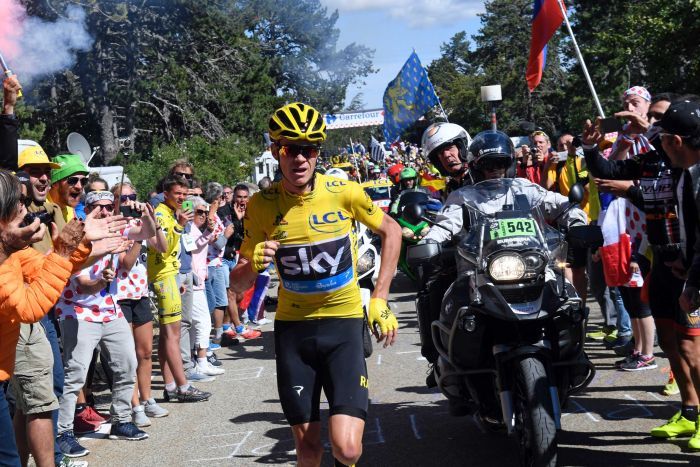 The stage up Mount Ventoux in the Tour de France always makes for some incredible racing as well as watching. The first interesting thing, well probably not the first but one of them, was that the stage finish had to be moved 6 kilometers down the mountain because of super high winds at the summit. The next interesting thing was perhaps one of the most interesting things to happen in the Tour de France EVER. Chris Froome, the wearer of the yellow jersey, left his broken bike on the side of the road and started running to the finish line, over a kilometer away.

The incident began when the hoards of spectators on the side of the road only left space for about one rider to fit through. The motorcycles ahead of Froome’s group were slowed and eventually stopped while one immediately ahead of the riders crashed into them. Froome and a few other riders then ended up crashing as well. Froome’s bike was completely useless as you can see from the photo below. With all of the spectators and other riders falling back the neutral support car was a few minutes back and his team car was even farther. The only thing left for him to do was run. As you can see in NBC Sports‘s video below, he didn’t just run for a few feet but for quite awhile. He eventually was able to get a neutral support bike but then also had issues with it and eventually his team car made it to him to give his spare bike. Froome ended up losing a few minutes but not a lot of time as could easily have been the case. The Commissaire’s however awarded Chris Froome and the others involved in the crash the same time thus leaving Froome with the Yellow Jersey.