When I was 19 I moved to Marin County California to be a professional sailor (not like the Navy). I raced and maintained sailboats, and also coached. One day while crossing the Richmond bridge I rear-ended the person in front of me. My little white Subaru wagon was probably one of the first casualties of the war on texting while driving. Any-who, with the flick of my thumb I was forced into the world of bicycle commuting. I began cycling more and more on my orange Trek 1000 and finally thought of myself as somewhere between Kevin Bacon in Quicksilver and Lance. I had been mountain biking since I was 11 and even worked in a bike shop for a summer, but this was my first real experience spending a lot of time on a road bike. 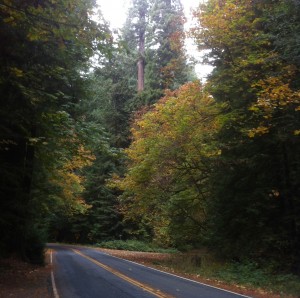 One day I was out on a 40 miler with my friend Charlie. We were about 10 miles from home descending into Mill Valley when I hit a big pot hole and blew out my front tire. I quickly pulled over and yanked out my flat kit.

As professional sailing pays about as much as professional roller derby, I had taken a job at REI to subsidize my biking habit by way of shop discounts. Needless to say I had a sweet repair setup. A patch kit, a tube, a few Co2 cartridges and a multi tool all bundled up in a tiny saddle bag. I carried two extra tubes in my jersey because I believe in over preparation and redundancy. Also, I had no option other than to bike everywhere I went. In my mind, a multi-puncture day could, theoretically, leave my 140 pound, spandex clad, frame “clippity clopping” through The Tenderloin at midnight. So, I carried a bunch of tubes.

In a jiffy I used a lever to unseat the tire and took out the tube to have a look. Two flat holes where the rim had compressed the tube against the edge of the pothole – a pinch flat or a “snake bite” as some call it. I put a new tube in, reseated the tire, used a Co2 shooter to fill it up, then packed up my kit.

Charlie and I jumped on our bikes and continued riding down the hill. I began building speed, feeling the warm California sun on my face. Charlie passed me and smiled just as my tire blew out again. Pow! “What the screw?” We had made it all of 90 seconds down the road.

“That sucks” Charlie says to me. I pulled out a second tube and went to work. Charlie spoke up again, “Did you check your tire?” Now, as a mountain biker I knew about pinch flats, but a hole in the sidewall was almost unheard of on a big 2 inch wide tire. What I took away from the comment was “Is there a thorn in it?”  What he meant, however, was “Is your tire cut and causing the tube to fail with 110 pounds of pressure in it?”  I said “Yeah, there’s nothing in it” and went about my business speedily putting the other tube in.

Charlie was pretty convinced something was wrong with my tire but for some reason he let me bulldoze him into submission. “I CHECKED THE TIRE THERE’S NOTHING WRONG!” I fumed. I believe I uttered this exact phrase when I used his first and then his second spare tube in a fury of cursing and anger. By the time I needed his first spare we were at the bottom of the hill on the main road that would take us from Mill Valley back to Tiburon. Still only half a mile from the pothole.

You know they say when people get lost in the woods and die it’s not because of one mistake, it’s because of a series of bad decisions. After the 5th flat Charlie, in his ever calm and wonderful personality, expressed the desire to ride home and grab the car so he could come pick me up. I agreed and let him go but I was determined to beat this stupid bike. Having gone through all my new tubes (and Charlie’s), I patched the slice in the side of one of the old ones. The gash seemed to have appeared to come from nowhere. I was puzzled by the nature of the repeated flats but gave it little thought as I began pumping; my Co2 supply was long gone at this point as well.

After the second patched tube blew I shouted out loud “Screw it.” I had made the decision to ride the last 9.5 miles home on the rim and tire. I stomped on the pedals as the air was rushing out. For those of you who are experienced please don’t judge, I was new to cycling, dumb and full of piss and vinegar. For those of you that are new to cycling, do not EVER try to ride on a busy two lane road with a flat front tire. You will surely end up laying on the ground in a heap staring at the tread of a taxi’s tire about to crush your face.

Anyway, the cab narrowly missed my head and I conceded to the gods of bicycling. “I know you’re trying to teach me something boys but I haven’t the foggiest idea as to what.” Being 20, I didn’t know when to stop and just let things go, or to think for that matter. I pulled off my shoes and began walking toward home.

About 20 minutes later Charlie showed up and we tossed my bike in the car. I told him about my attempt to ride on the flat tire and he laughed. He suggested I have a good look at the tire when I got home. “Yeah, maybe you’re right”. Later that night I found the gash in the sidewall. Seemed like an awful lot to go through just to learn about sidewall gashes but at that time in my life I had a habit of doing everything the hard way.