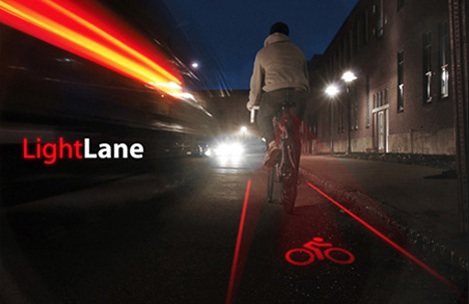 Without the right attitude and gear, biking at night can be terrifying and dangerous. Even with the right stuff, night riding is intimidating until you get used to it. But there’s another world out there at night, all alone with the scent, the sounds and your thoughts. Don’t miss out on it.

Most of your day-only glasses wont work at night, don’t even try to use them, they’re too dark. Clear is the best choice. If you don’t have a pair of clear cycling glasses, try a cheap pair of clear safety glasses. You can pick them up anywhere. Safety glasses also offer better shielding from the wind, most of them have some type of side protection. Don’t worry too much about how you look, but if you’re self-conscious about it, designer safety glasses are available too.

If you ride a high end road or mountain bike, and even though it’s prohibited by most law, the mechanic at the shop you bought it from probably removed all of the reflectors long before you bought it. If he didn’t it’s likely that you removed them yourself, or they broke off at some point and you didn’t replace them. Get new reflectors.

It’s been argued that you’re actually more visible to cars at night — when properly adorned with lights and reflectors. Cars aren’t looking for bikes during the day, but they can’t ignore a well-lit bike, flashing red, reflecting their own headlights on the road in front of them.

The more lights the better. The more power the better. Most jurisdictions have laws governing the use of lights on bikes at night, and it’s a given you can’t ride without them. Most cycling advocates agree that the minimum standards set by law concerning adding lights to bikes are not stringent enough. Beefing up your bike with extra lights is always recommended. Here is a list of what we think are the best bike lights on the market.

A rear red light is essential, particularly one that blinks. A blinking red light is more likely to get the attention of traffic that might not spot you otherwise. Blinking red lights have exploded in popularity, because they work. Some have reflective qualities and can double as the rear reflector required by law.

All types of cycling specific headlights are on the market, including strobes. Some argue that strobes are too bright and can blind anyone but the cyclist. But they do offer extra safety and are hard to miss. For extra points, get a second light for your helmet, which allows you to see wherever you look — although really, it’s as much about being seen as it is being able to see.

The choices of a headlight for your bike are almost overwhelming, with choices ranging from about $20, to $400.  Things to consider besides cost is battery life, battery placement on the frame — some of them have external batteries — and what type of riding you’re going to do at night. Some mountain bike lights are powerful enough to blind you. Others provide only enough light so that motorists see you. You can use anything you want, but go with the best one you can afford. Generally, if you want to be able to see you where you a biking at night you need a minimum of 600 lumens.

If adding all those reflectors seems a bit much, consider adding reflective tape to your bike. Reflective tape is available in bike shops in various forms. Some of it is pre-cut, and designed to be applied specific parts of the bike or your apparel. Add it to moving parts such as pedals, the inside of the rims, the pedals or even the heels of your shoe. Moving parts catch light better than frames.

High quality reflective gear makes you a lot more visible. It not only works at night, but even during the day. Bike shops have cycling vests starting at about $10 to $15. When you hear or see the lights of a vehicle approaching from the rear, sit up into a vertical position, it makes your reflective gear more noticeable.

If it looks like a car doesn’t see you, hop off your bike and onto the sidewalk or ditch. Don’t chance it. Give yourself a little space between yourself and the curb. That gives you some room to move over in case you discover a large vehicle is bearing down on you. It’s a hard concept to perceive at first, but ride as if you were invisible. In other words, ride in such a way that cars won’t hit you — even if they don’t see you.

Regardless of what light you have, slow down to increase your reaction time and margin for error. Constant vigilance is important. Small pebbles can become tire bouncing boulders, dark spots on the pavement can be dips or potholes. Shadows can be dogs, cats or other creatures of the night.

If you can’t bear the thought of crashing your $3,000 road bike at night, consider a different bike. The right bike for night riding is one that is the safest. An older road bike, fatter-than-normal tires, is a good choice. Mountain bikes have the necessary stability to stay rubber-side down if you hit rocks or gravel. But there’s no reason why you cant ride your baby at night either, it’s just a personal choice, but you know how skittish horses are, road bikes are just like that when surprised.