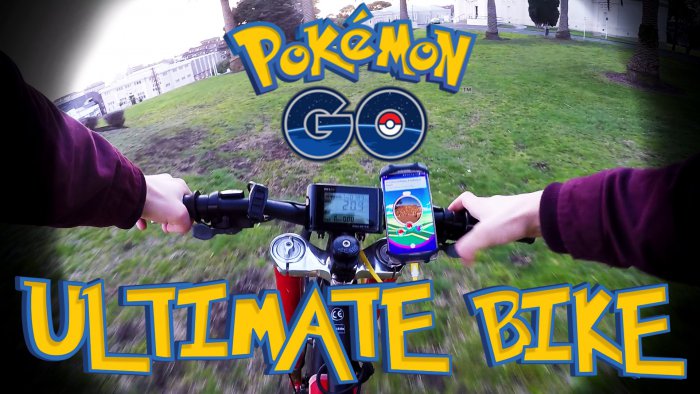 This past summer saw more people than usual staring at their phones while walking through parks, streets, as well as into traffic.  In fact there were thousands of people running around being guided by their smartphones playing the newest app sensation Pokemon Go.

Tapping into people’s childhood memories, Pokemon Go is a game requiring you to actively go and catch em all (all the Pokemons that is).  However, time to get a competitive edge.  Enough with the running down Poke characters, time to up the ante and start biking and Pokemon Go -ing to track down more of those Pokemons faster.

What is Pokemon Go?

Pokemon Go is an app for smart phones that uses the players GPS technology making the player track, locate and catch the Pokemon creatures.  It is an artificial reality game where players create their own avatar and the game makes players actively walk, run, or in this case bike, down the next Pokemon they need to catch.  Pokemon Go was released in July of 2016 and quickly became one of the most popular apps worldwide.

Pokemon first became popular in the mid nineties with kids collecting and trading the cards in an effort to collect all the Pokemons.  At elementary schools recesses and lunches would see swarms of kids battling and trading the cards.  It got to the point where many schools banned Pokemon cards to avoid fights and distractions.  Pokemon cards were often sold behind locked glass cabinets at stores because they were such a hot commodity!  So the answer to why play:  nostalgia.  Most people have since sold off or given away their cards, so it is a blast from the past to be able to go outside and actively chase down your memorable Pokemon characters.

Pokemon Go is a competitive game, so why not look for that extra edge and attempt to catch them all faster?!  Pokemon Go using a bicycle can be done with only a couple limitations.  Firstly you will need to get a smartphone mount for your handlebars.  Secondly, your phone battery tends to drain quickly when playing the game so an external battery pack may be necessary to attach to a pannier if you want to play for a considerable amount of time.  Thirdly it is best to set the phone to vibrate when a Pokemon appears on the map, so you can feel the vibration through the bars while keeping your eyes on the road!

As usual the bike makes everything better and that definitely goes for biking and Pokemon Go. So time to rig up a phone mount, battery pack and maybe get some cool half finger gloves just like Ash had, and you will be on your way to catching all the Pokemons!