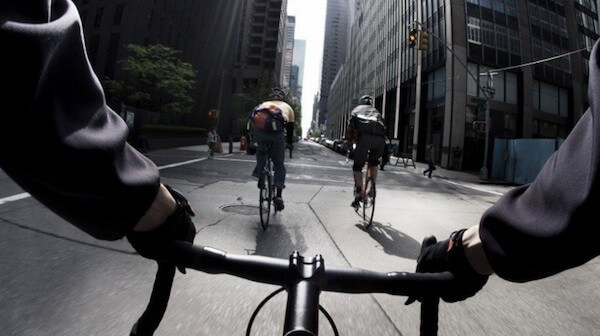 Riding in traffic can be intimidating to the beginner cyclist. But you’ll get accustomed to it. You have every right to be out there, sharing the road with vehicles. Cycling and traffic safety issues have come a long way in the past few years. It’s partially because of a new awareness, and the fact that cyclists know what to expect from cars and trucks, and how to deal with them.

Most beginner cyclists dread the sound of cars approaching from the rear, but you should be using it to your advantage. Pay close attention to that low rumble, as well as your surroundings, just as you would while driving. Use your senses. You can almost always hear an engine or tires on pavement in advance of the car. Stay the course and allow the car to pass. It’s fine to ease over slightly, but not too much. If you hear squealing tires, hard engine acceleration or loud music, pull over and stop. Let the vehicle pass.

It might seem like common knowledge to ride as far to the right as possible, but riding too far to the right can cause punctures, hitting a rough patch, or someone in a parked car could open their door right in front of you. If you’re too far to the right, you’re less visible to motorists, and cars coming from behind may pass you way too close in the same lane — because you didn’t make them change lanes to go around you.

Don’t be afraid to ride further to the left and take the lane. Cars approaching from the rear are not always looking to the right. They should be looking straight ahead, and if you’re too far to the right, they might not even see you until you bounce off their windshield. So it’s not always advisable to ride as far to the right as possible, take the lane if you feel more comfortable out there, you have every right to it.

You might worry that riding to the left makes you more vulnerable to cars coming from behind. But stats prove that you’re more likely to get hit by a car at an intersection, than from a car coming up from behind you. So while both scenarios have risk, you generally reduce your risk by riding a little farther left. Your actual lane position also depends on road conditions. On fast roadways with few cross streets, with less of a chance of being hit at intersections, it’s fine to ride farther to the right. On slow roads with lots of intersections, ride farther left. Also make sure to establish your position early, what this means is if you see an obstacle up ahead do not wait until you are at it to go around. Do a quick shoulder check and move to the left and establish your position to avoid the obstacle as soon as you are able to safely.

It might be tempting in city traffic, to get on the sidewalk. Don’t do it unless no other safe option exists. Cars aren’t looking for you on the sidewalk, and cars turning left or right can hit you when you cross at intersections. Motorists at intersections or when leaving or entering driveways often do not see swift-moving cyclists traveling on sidewalks. And you’re threatening pedestrians on the sidewalk, who could get hurt if you hit them, file a lawsuit and take your bike away from you.

If you’ve spent any time on the highway, you’ve seen or heard them — obnoxious drivers that yell obscenities, throw stuff at you or even swerve in your direction. As tempting as it is to find a rock to chuck at at them, don’t do it. They’re just looking for an excuse to get even more obnoxious. Don’t reciprocate. Don’t yell, and don’t give them the finger. Don’t make eye contact. Pretend that you don’t notice them at all. Confrontation with people like that only leads to more trouble. If the incident is bad enough, get the license number and report them.

Highway 101 runs along the Pacific Coastline. It’s one of the most beautiful highways in North America, and there’s no shortage of cyclists using it on a daily basis. It’s a perfect example of cyclists and high-speed traffic, coexisting together. The highway is narrow, with little or no shoulder in places. When trucks pass, you feel the wind, smell the diesel, and feel the vortex of wind, sucking you forward. There’s lots of highways with similar problems, fortunately the Coastal states recognize cyclists by posting signs, warning traffic to look out for them. You always feel, and are more safe when signage is present on the highway, look for it, and if it recommends a specific cycling route, take it.

There’s a reason why cycling gear is bright colored, it’s not about fashion, it’s so that cars can see you on the road. It’s a no-brainer, wear as much of it as possible to be safer on the roads.

Use hand signals to indicate your intentions. Make eye contact with drivers at intersections to ensure they see you, and then wave a thank-you when you’re given the right of way.

The safest roads have the fewest cars and lower speeds. In some instances, a longer route with fewer cars will be faster than a shorter, busy one. It’s not always possible, but try to locate roads with a big, wide shoulder you can ride on safely.

Steady as a Rock

Looking back at cars approaching from the rear is dangerous. It’s sometimes unavoidable, but looking back to the left causes you to steer to the left, almost everyone does it, and it’s often the cause of bike and vehicle crashes. If you have to look back, move your right hand toward the center of the handlebar near the stem, and drop your left hand off the bar as you turn your head to look back, and be aware. It can be done safely. The more practice you have with it the better, make sure to be able to do this in a straight line before implementing on a busy road.

Some States have initiated the 36-inch clearance rule for cyclists. When a motorist passes a cyclist they have to give them 3 feet of clearance. As of October 2015, 24 states—Arizona, Arkansas, California, Colorado, Connecticut, Delaware, Florida, Georgia, Illinois, Kansas, Louisiana, Maine, Maryland, Minnesota, Mississippi, Nebraska, Nevada, New Hampshire, Oklahoma, Tennessee, Virginia, Utah, West Virginia and Wisconsin—and the District of Columbia have enacted 3-feet passing laws. These States should be applauded.

The general rule of thumb for motorists everywhere — and one that in theory should keep cyclist safe states that: “Drivers of motor vehicles should overtake and pass a cyclist only when it can be done safely without endangering the person riding the bicycle.” Wouldn’t it be great if cyclists could depend on it.