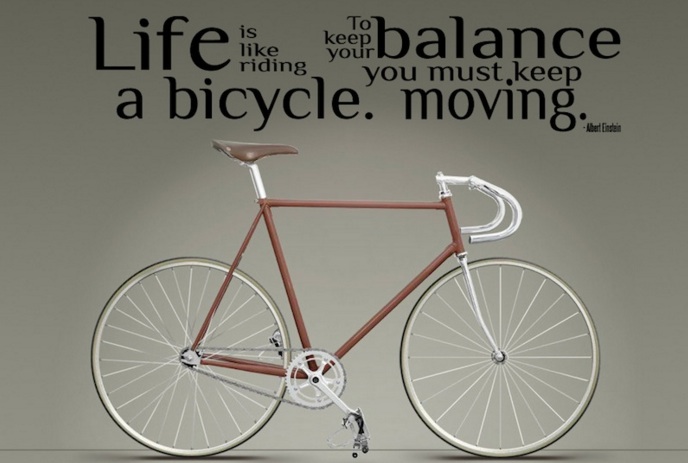 You may have wondered about it while riding; it doesn’t feel like you’re balancing your bike yet, somehow, even though you’re only touching the ground in two 1/2-inch patches, the bike feels like it’s anchored to the pavement. The stability of a bike isn’t an accident, they’re designed that way.

Road bikes in motion are incredibly stable, even though they’re incredibly top heavy. Other similar objects topple over sideways the minute you let go of them. Bikes also topple without forward motion. Bicycles lack lateral — side-to-side — stability, and only remain upright when moving forward. So it’s safe to assume that it’s forward motion that keeps them as solid as a rock.

Albert Einstein was a cyclist, and was cycling when he realized the infamous formula, E=mc2. “I thought of it while riding my bicycle,” is reputedly what Albert Einstein said about his Special Theory of Relativity. Even though Einstein didn’t apply the theory directly to bicycles, he still knew that forward motion was likely the key to a bike’s stability. “Life is like riding a bicycle.” He said. “To keep your balance, you must keep moving.”

Recent studies have suggested that no single theory is solely responsible for the stabilizing force of a bicycle, and that everything contributes to balance and stability. But designers rely on a few common, known theories such as the gyro effect, the caster effect, and calculations that include a bikes, trail, offset and rake.

The gyroscopic effect of the wheels is the go-to explanation by some physicists as to why your bike stays upright. It basically means that spinning wheels tend to stay aligned in their original direction. The effect is used in navigation to maintain stability for all kinds of machines. NASA rockets rely heavily on the gyroscopic effect.

But the gyroscopic effect is actually quite minimal. Studies have shown that a bike stays upright when it is steered to keep the center of mass over its wheels. The steering is usually done by the rider, but may also be done by the bike itself, completely without your assistance.

You’ve probably witnessed a self-steering bike before by pushing or letting go of a bike in motion. The bike won’t travel in a straight line for long in an upright position. It’s constantly falling to one side or the other and then lurching back to an upright position under its own momentum. It’s due to what is called the “caster effect.”

The caster effect describes what happens when a wheel has its contact point with the ground located at a different point from its steering axis. If the bike tips to the left, the trail or caster effect forces the bike to steer to the left. The bike steers into the fall, gets its wheels back under it, and stays upright. In other words, the fall becomes self-correcting because of the caster effect. The term “caster effect,” is a direct correlation to how caster wheels work on your favorite desk chair.

Rake, offset and trail more accurately describe what the caster effect really is on a bicycle. Rake and offset is the wheel axle’s offset from the steering axis. Offset determines how much trail a bike has. Think of trail as the tire patch “trailing” behind the steering axis. Industry standards for the average road bike offset has been roughly established at about 55 mm or 2 inches, which is regarded as a good combination of agility and comfort at low speed, and stability at higher speed.

Look at a motorcycle with a high degree of rake, and almost no trail, they’re extremely hard to steer and unstable at low speed, but fine on the freeway. Mountain bikes have less rake and more trail, and are one of the most stable bikes out there.

If that all seems confusing, it’s because it is. Even designers disagree with rake, trail and offset for one reason in particular, because it flip-flops or actually reverses when taken too far in one direction or the other.

The Most Stable Bikes

If you’re curious about bike stability, such as when purchasing a new bike, there are technical things that you can question to get the most out of your style of riding, or what you want to get out of a bike. For example, if you can determine the rake or offset of any given bike — the dealer may or may not know it — you can get somewhat of an idea of how the bike will handle by referring to the formula: Longer rake = less trail. Shorter rake = more trail.

Rake, offset and trail are just a few concepts that designers apply to a bike’s geometry to make it more or less stable. Bottom bracket drop, head tube angle — also know as the steering axis — and wheelbase are all figured into the equation. These geometry factors, work in tandem with tire selection, weight distribution, and other features on a bike.