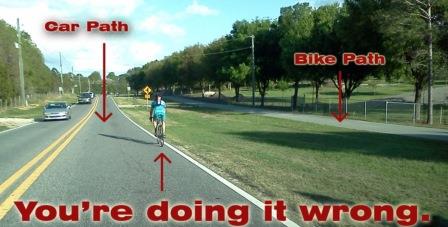 Multi-use paths are springing up everywhere, and that’s a good thing, but you need to practice good bike path etiquette. For cyclists, bike paths are probably one of the fastest, most convenient way to get around busy cities. They go over or under busy road ways and other slow areas while keeping you safely out of traffic. They can be dangerous however and a pain if users don’t know how to properly use them. As a cyclist, you need to account for your speed as well as make your intentions clear. These few tips will help you to have proper bike path etiquette.

There’s nothing like the feeling of glassy, smooth pavement that’s flat and straight with minimal stop requirements. But that doesn’t mean you should go as fast as you possibly can. Depending on ability, many cyclists easily top out at speeds greater than 20 mph. Bike paths are for everyone however and to stay safe, keep those around you safe, and avoid irritating everyone else, you should show respect to fellow cyclists, dog walkers, joggers, photographers, equestrians and everyone else that uses bike paths.

Not a Time Trial

Abandon your time-trial attitude. It’s fun to go fast, but a bike path isn’t the place to set records. It’s fine to crank things up a bit if you have clear sight lines with no pedestrians, but as a general rule, keep your speed under control. Most of the bike paths in cities have speed limits which may or may not be posted. However, longer bike paths that stretch on for miles through the country side can be different, with unlimited speed limits. Feel free to open it up if you can’t see another sole and conditions permit it.

It seems easy enough to swerve in and out of pedestrians or other slower cyclists, but it’s necessary to view it from the pedestrians angle; bikes are quiet, especially at high speeds. When a bike appears out of nowhere from behind, it can give someone big startle, even when you don’t pass that close. Proper bike path etiquette gives ample warning that you are passing long before you  are next to them.

With concentrated traffic on a bike path, it’s not always possible to stay in a regular line and swerving between people is sometimes necessary. Think of it as a highway, and apply the same principles as if you were in a car. Ride on the right side. Pass on the left. Act like a car in these situations. Right for travel, left for passing. And obey all traffic signals.

It’s common practice to yell, “on your left!” when approaching other cyclists or pedestrians. If they don’t move over yell it again. If they still don’t move or choose to ignore you, slow down to a crawl and ease by them if possible, but only if they give you enough room. If you’re a regular path rider, install a small bell or horn on your bike; it’s sure to wake up a sedentary or stubborn pedestrian.

Stay in your own lane. Don’t wander all over the trail. Other cyclists not observing correct bike path etiquette might be coming up behind you; just because you’re doing it right doesn’t mean everyone else is. Before you swing out to pass on the left or hit your brakes to stop, throw out a hand signal, and glance behind you for oncoming bikes.

Be especially careful when crossing a roadway, intersection, or pathway. On a bicycle, you do not automatically have the right of way over vehicles on the road you’re crossing like a pedestrian.  If you dismount and walk your bike across an intersection, you become a pedestrian, and have the right of way. Look for subtle paths that cross the path you’re riding on, some have markers, some don’t. Always be aware of pedestrians or other cyclists coming at you from the side.

Don’t Stop in the Middle

Don’t stop in the middle of the path and stand there like you own it. It’s one thing to stop to take pictures, take a drink from your water bottle or simply take in the scenery, but stopping in the middle only puts you in harm’s way. You wouldn’t stop your car in the middle of the road would you? Pull over to the side when taking a break; don’t do it on your bike. If possible, get off the path; but only when it’s allowed by your local path rules. It’s just the right thing to do.

Be Prepared to Stop

People are unpredictable; dogs and kids especially. Anyone can get involved in a conversation or wrapped up in their own thoughts and come to an abrupt halt in front of you, even if they hear you coming. Slow to a walking pace around traffic and keep your hands on your brakes.

You should have a fully functioning bicycle when cycling on pathways. Nothing’s going to help you if your brake cables snap or your chain falls off at the wrong time or a sharp edge catches a pedestrians clothing. Make sure your bike is well maintained before taking it out on a long ride. Check your brakes and tire pressure before you leave and if something doesn’t feel right, fix it right away.

If you feel that you might be out after the sun goes down, the single most important safety aspect is visibility. Install or keep some cheap magnetic lights on your bike or in your saddle bag. Wear bright, reflective gear, or add reflective tape to your bike. Pedestrians look like shadows in the night, if you can’t see them, maybe they can see you. This is not only important for bike path etiquette but for riding in general in low light conditions. Stay safe; always.

Bikes are big machines on paths. They’re faster, more efficient, but can also be the most dangerous. Always yield to pedestrians no matter what the circumstances. “Wheels yield to heels” is the unsung motto for cycling on any path, sidewalk, or highway for that matter. Follow the adage and proper bike path etiquette and you can’t go wrong when cycling on pathways. Get out there and enjoy them, they’re made for you.