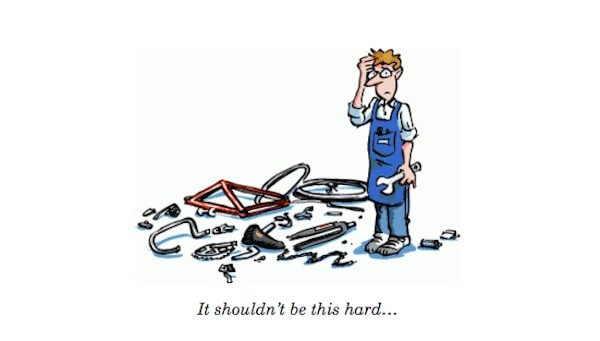 Clicking, squeaking, rattling, rubbing, scraping, sound familiar? Even high-dollar bikes make noise that can drive you mad, and ruin a ride. The frustration over what’s making the sound is the issue — is it serious — where is it coming from? Most of the time, bike noises are a simple fix, finding them is the hard part. Knowing where to look is a good place to start.

Chains probably make more noise than anything else on your bike. A simple lube job can prevent most of them. But a regular, consistent clicking noise at a regular spot on your pedal revolution could be a tight link on your chain. Tip the bike upside down and turn the pedals backward. If you see a bump in chain movement anywhere, but more particularly when it passes through the derailleur or over the big gear in front, you’ve located a tight link, and the possible source of the clicking sound.

Add lube to the link. It’s sometimes possible to grasp the link and bend it slightly to loosen it up. If the link has separated from the pin in front, the clicking sound might be coming from the link catching the side of the derailleur housing as it passes through. Fix it by replacing the bad link with a master-link or missing-link.

If your chain checks out OK, the clicking might be coming from something as simple as a cable end that wasn’t trimmed properly. As your shoe passes the cable, it flicks the end of the cable. If you find this is the problem, it makes you feel like a horses ass because it’s so simple, and you’ve been allowing it to hound you. Bend the cable or trim it off.

If a click is accompanied by a thump or bump that you can feel in the frame or seat while riding, it might be coming from the bottom bracket. Even experienced mechanics get stumped by this one, and the only real solution is to take apart the bottom bracket, clean it and reassemble it. If there’s an obvious problem, it will show up when it’s apart. Typically, cleaning and reassembling does the trick.

Clicks Under a Load

Some bike noises can’t be diagnosed accurately when the bike is on a stand, and don’t occur unless the bike is under load. Bike frames are under lots of stress, cracks happen, and even though it sounds like the click is coming from the drivetrain, it’s might actually be the frame. Never rule out anything, the sound could also be coming from your seat.

Spokes click or ping when under stress, such as when cornering, climbing or sprinting. The sound originates where two spokes cross and touch each other. Add oil to the intersection to quiet the noise. Spoke nipples also make noise, but it’s more of a rattling, oil can help here too.

Squeaks are almost as annoying as clunks. Squeaking can originate from your seat, but if it’s a regular squeak each time your pedal passes a certain point, it’s probably your shoe or a combination of shoe and pedal. Look for an abrasion on the sole of your shoe.

Rattles might be the most common off all bike noises. At some point, something always seems to rattle. While rattling can have a variety of sources, a few are more common than others.

Some of the typical culprits are bottle cages, and the bolts that secure them to the frame. If you suspect it’s the cage making all the noise, place your hand on it while riding. If it quiets down, you’ve found the bike noise. Tighten the bolts, get a different water bottle, or bend the cage slightly to make it grip the bottle tighter.

Tool kits are notorious for making noise, and have fooled more cyclists than anything else. Any number of tools can bang together causing a tinkling, rattling noise. Even pocket change in your tool kit or underseat pack can make an incredible amount of noise. Stuff foam in the pack, or otherwise secure everything to quiet it down.

Cable routing is a definite bike sound. It might not seem possible, but the thin, bare cable where it runs along the down tube, or the top tube, can rattle against the frame, it’s very common. Other sources of rattling might be coming from the plastic cable housing, where the left and right shifter cables cross in front of the bike.

Noises in the Machine

Bike noises are frustrating and can play some real mental games. Some cyclists hear them, some don’t. Some you can find, others you can’t. Some of them defy diagnosis, exhibiting sounds that contradict common knowledge. But if you listen close and ride often, you’ll likely find where the noise is coming from.