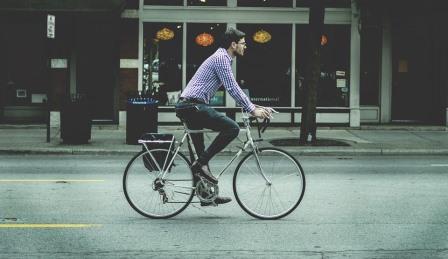 What if you put a jar on your table. Each time you ride your bike to work instead of driving your car, you add money to the jar. Suppose you abandoned your car altogether. Bike commuting can save you a lot of money.

According to the Alliance for Walking & Biking’s 2014 Benchmarking Report, 91.6 percent of Americans commute by car to work. That compares to 5 percent who use public transit, 2.8 percent who walk, and just 0.6 percent bike to work. What’s wrong with this picture?

The average American household spends over $9,000 a year to own a car, making it the second-largest expense after housing, with commuting by car typically requiring the most miles traveled. Cost studies are based on the accumulative cost of five categories – maintenance, fuel, tires, insurance and depreciation. The Bureau of Labor Statistics reports that Americans spend more on transportation than on food.

Huff Post Business says that Americans spend over $2,000 a year for gas alone. Insurance adds up to an annual average of over $1,000 dollars. Your car’s depreciation lifts $3,571 a year from your wallet.

The IRS calculates that driving a car costs 55 and a half cents per mile. If your commute to work is ten miles from home, your commuting cost per day is just over $11. or $1110.00 over the course of 100 days.

Every mile you drive in your car costs you money. It’s wearing out your tires, brakes, engine and drivetrain. It’s using up motor oil,   breaking down belts and other parts that will eventually need replaced. Bikes need maintenance as well, but are much simpler, cheaper machines. The less you drive, the more you save.

“Transportation costs can often be a blind spot for families looking to save,” says Bruce McClary, vice president of public relations and external affairs for the National Foundation for Credit Counseling. In general, look to where you spend a lot to save a lot.

“Many individuals and families simply take for granted the two-car, driving-to-work arrangement that’s the norm for American households and often don’t consider alternatives like public transportation, carpooling, or bike commuting,” McClary says. Mclary ditched only one of his two cars, and simply by biking to work it has netted him a monthly savings of $128.91. After commuting to work for four years and eight months. Mclary reported that he saved $7,219.

The Sierra Club, in cooperation with AAA, reports that the cost of owning a bicycle per year is $308. American cyclists save a whopping 4.6 billion a year by not driving. This is an average figure of course depending on what type of bike you ride, how far to work, and how much you spend on bike maintenance. Do your own calculation with Kiplinger’s personal calculator.

Elizabeth Murphy is the communications director for the League of American Cyclists. “Biking certainly offers a cheaper way to get to and from.” She says. “Driving five days a week is really eating into my budget. So why don’t more people bike to work? Because of the way many roads are set up to cater to cars, riding to work can seem intimidating if you’ve never done it before,” she adds.

Murphy says the first step is figuring out what route you will take to work. From there, you can pick out a bike that will work well on the terrain where you’ll be riding. Murphy recommends finding a biking mentor who can help you find cycling-friendly roads and help you build the confidence you’ll need.”Finding a friend can be really helpful in doing that first ride,” Murphy says. “Once people sort of realize, ‘Hey, I did this. I can do it,’ it’s a pretty simple transition.”

You’ve heard the old argument “time is money,” and you might think that it takes more time to get where you’re going on a bike but it depends. How much time depends on where you’re at, and where you’re going. For example, in some locations, bigger cities for example, you can actually get to many destinations as quickly or even faster on a bicycle than you can in a car because of shortcuts though parks, utilizing bike lanes and paths, and taking more direct routes through areas you otherwise wouldn’t drive through. Take it a step further and think about all the time spent sitting in your car in traffic jams, while that bike messenger or commuter whizzes past while you’re sitting idle in traffic.

Cycling is far better for your health than driving a car. The exercise you get while riding a bike has long-term health benefits with short-term energy benefits. If you’re healthier, you stay out of the doctors office and everyone knows how expensive that is. Healthier people also sometimes get lower insurance rates, which should also be a part of the equation.

It’s one thing to calculate stats, and some people argue that because of  low population density in some areas and scattered employment, commuting by bike isn’t always a viable option for millions of American workers. Weather is another factor, but there is all kinds of gear available for cool or inclement weather.

Give Bike Commuting a Chance

It’s sufficient to say that millions of workers live in large cities, suburbs or communities close to work. If you’re one of those people, biking to work is a viable alternative to driving. If you own a car only for commuting, becoming a bike commuter might be an option that can save you money and encourage you to ditch your car completely. By bike commuting you will have better health, more money in your pocket, more energy, and the pride that comes from getting to work under your own power.