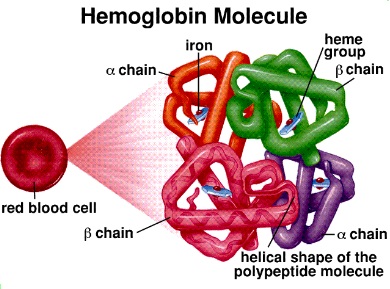 The Importance of Iron

The Many Faces of Anemia

Symptoms of anemia are many. They may include chronic fatigue, weakness, dizziness, headaches, depression, sore tongue, sensitivity to cold (low body temp) and shortness of breath doing simple tasks like climbing stairs, walking short distances, doing housework. If that’s not enough you may also experience restless leg syndrome and pica (the weird desire to chew paper, dirt or non-food items.) Still more —  a loss of interest in work, recreation, relationships, and intimacy…. Damn.

Iron plays a crucial role in the body.  Iron is what the oxygen (O2) is bonded to in the hemogloben of which is then transported around the body. Each hemoglobin is then capable of carrying four oxygen molecules. These vehicles, also known as red blood cells or hemoglobin, carry oxygen throughout the body to release energy in the form of carbohydrates (sugars).

Iron is one of the most abundant minerals on earth. About two-thirds of the body’s iron is found in hemoglobin. An adequate supply of iron is necessary for the body to produce hemoglobin. If too little iron is available, fewer and/or smaller red blood cells are produced, leading to decreased oxygen carrying capacity of the blood. Because of anemia and cycling, you could actually become dizzy while cycling.

Iron also plays an important role in carrying carbon dioxide from cells as well as many other significant functions to keep bodies running optimally. It’s pretty obvious by now that the harder you cycle the more iron is needed to transport enough oxygen to keep up with energy demands. If you don’t have enough iron circulating around your body, you won’t be able to produce adequate energy and you get tired. You may not even realize that you are declining in iron and that anemia and cycling is affecting your performance.

Iron deficiency can be the result of numerous factors. Conditions that result in iron deficiency may include menstruation, blood donation, surgeries, and accidents. Iron deficiency can also be caused by certain medications, dietary supplements or substances that cause bleeding such as pain relievers with aspirin, and/or alcohol abuse.

Women Most at Risk

Women are most at risk. Men are rarely iron deficient; but when they are, it is generally due to blood loss from the digestive tract diseases that affect iron absorption. Except for those who are strict vegetarians, men rarely have dietary iron deficiency.

Not Typically an Issue

Sports anemia is usually not treated. If treatment is done, then athletes may be asked to refrain from training for 3 to 5 days and have blood tests repeated to produce normal results to offset anemia and cycling.

Of particular concern is athletes taking iron in the hopes of increasing their performance. They can develop iron overload and eventually experience complications. But increased iron levels do not improve performance. In fact extra iron is stored in body organs and can result in cirrhosis of the liver, heart failure, and possibly cancer.

Your Mom Was Right

Your mother and her allie Popeye (a spinach eating cartoon character) was right about spinach. Although the iron found in vegetables, called “non-heme” iron, does not absorb quite as well as iron found in animal foods called “heme iron”. A well rounded diet with both types included in your diet each week is recommended.

A few examples of food high in iron include the following:

If you do heavy cycle training and/or are a woman and you’re concerned about anema and cycling, get your iron levels tested sooner rather than later. At least if nothing is wrong you can use it as a benchmark for the next test.

It’s wise to just be aware and think about what you put into your body. This is one of the biggest reasons for iron deficiency; not eating right. A few small adjustments to your diet could make all the difference to your energy levels and morale a few months down the road.

When to See a doctor