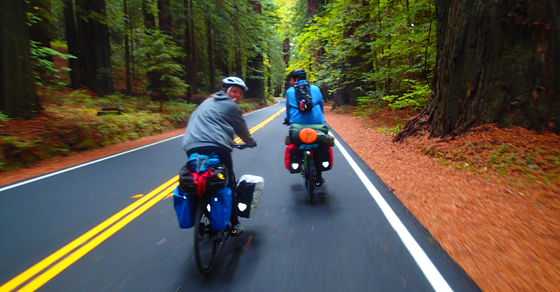 Getting on my bike for the first ride was unforgettable – down pouring rain, crazy side winds, one long road, hills, a bridge, and my mom screaming in the background telling us not to go. I wore a thin jacket that I thought was waterproof but apparently wasn’t, so I was soaked to the bone and shivering pretty quickly. I have a problem with packing (I always pack way too much) so I packed a few nights before leaving and only put in the bare necessities.

Good thing my sister handed me a waterproof jacket the day before leaving because the next few weeks would be nonstop wet. I’ll admit… I left unprepared for our tour, but what the hell I made it from Vancouver, Canada to Cabo San Lucas, Mexico nonetheless. I personally think leaving with less is better than leaving with too much not only because of the weight on your bike, but because if you really need it you can buy it along the way very easily (and maybe even cheaper). For example, I had to buy a headlamp (duh… didn’t hear about the end of that one for awhile). It was hard for me puckering up and handing over a lot of cash to be able to do this tour, especially since I’m a 20 year old, halfway through a degree and no job. Looking back though I’m happy I bought waterproof Ortlieb paniers, otherwise biking through Washington would have been brutal. Buying the right equipment will make you happier along the way and not to mention more comfortable.

Speaking of being comfortable…. It made me think of an uncomfortable night and Sandra still states that it was the worst night we endured during our trip. We got to a town, Moss Landing, and the only campsite we were planning on staying at was strictly for RVs. It was late in the day and we had no choice but to stay there for a night – but where? Our two options were either forking out the big bucks for a hotel or stealth camping. We ended up stealth camping behind the Monterey Aquarium Research Centre under an overhang. It doesn’t sound that bad right? It was noisy, dreary, very foggy, lots of humidity that made us sticky, and to top it off there was an odd man who wouldn’t leave us alone. In fact, he came back at 7:30AM the next morning and followed us on his bike as we were leaving town to Monterey.

Later that day we reached Monterey and decided to make a visit to the famous Monterey Bay Aquarium (after all, we spent the night at their research center for free!) After spending a good 4-5 hours in the aquarium enjoying looking at all the sea creatures we ventured outside to where we locked up our bikes. Long behold the same odd man who had followed us the night before, and followed us that morning was waiting for us at our bikes! We were freaked out. Luckily, my sister and I were traveling with two men, Gerry and Rylan, and they dealt with the stalker. It wasn’t the best experience but the fact is there’s always going to be ups and downs on any trip, people who you will never forget and people you will want to forget, but it’s part of the journey. When you go through downs you just have to keep on pedaling.

Written by Ella MacDonald. Get more detail of their Epic Journey here and if you wish to donate to their cause do that here. More details on their adventure soon.

Their Moto – When Children Play the World Wins. So let’s give them a chance.