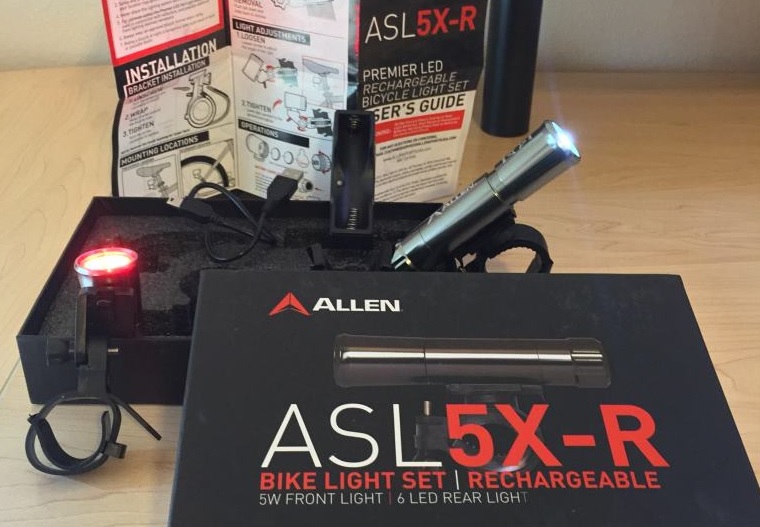 Allen Sports is a company that was founded in 1967 and makes an assortment of cycling related products ranging from folding bikes to car trunk racks to accessories around the bike. They have a focus on making the finest bike racks and cycling related products in all of their worldwide locations. In their mix of products they make a number of lights including the Allen Sports Light 5X-R Bike Light Set.

The Allen Sports Light – 5X-R Bike Light Set is a bike specific light which mounts on your handlebars and seat post or seat stay for night riding. 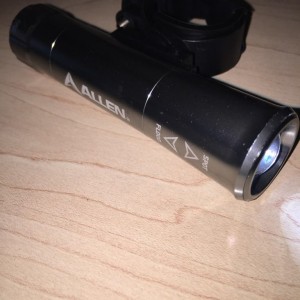 The front Allen Sports Light – 5X-R Bike Light Set is encased in a sleek aluminum case and has 280 lumens of light that can be focused from a wide beam to narrow by sliding the front lens forward. The light has three modes which can be cycled through simply by pressing the on/off button. It has full power, half power, and a flashing mode. The light is mounted on an adjustable plastic bracket that is secured to the handlebars via a small bolt with a head that can be tightened with your fingers. Depending upon the size of your handlebars, the light comes with two rubber sleeves to act as spacers if needed to mount. The back of the bracket has a small clip that can be pushed down to remove the light. The removable battery is rechargeable and comes with a small docking station that uses an included USB cable to recharge it.

The rear light of the Allen Sports Light – 5X-R Bike Light Set is also encased in aluminum for durability and has a similar look to the front. The light is a 5 lumen red light with 6 LED’s that has two modes: flashing and constant.  The light comes with an adjustable mounting bracket that the light can also be removed from. Its batteries are CR-2032 non-rechargeables but can be found wherever batteries are sold. Both the front and rear lights have rubber gaskets to make the lights waterproof. 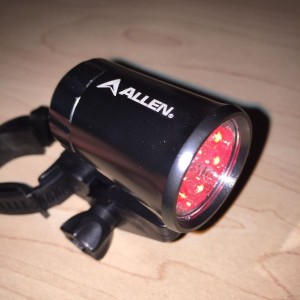 The Allen Sports Light – 5X-R Bike Light Set are sleek metal lights that not only work well but look good also. Because the headlight is removable, it’s a light that you could use for an everyday flashlight off the bike because of its small size and brightness. Being able to adjust the focus of the beam simply by sliding the lens forward is innovative yet simple. The design and construction of the lights is actually above what you would expect in the price range that these lights fall.

The brackets for the lights are relatively straight forward to install but do take some time. The downfall of the Allen Sports Light – 5X-R Bike Light Set is the construction of the brackets particularly the front. The rear consists of a flexible enough plastic band that can be securely tightened with a cleverly designed plastic tightening screw. The front however uses a harder, inflexible plastic that must be opened to fit around the handlebar. If a product is limited by its weakest point, this is it. With repeated installations and/or excessive opening to install the bracket, this piece will probably break. If you are careful with it and only install it once and just remove the light from the bracket while on the bike instead of the whole mechanism, you will probably be fine.

Although not in issue when testing, the mounting of the light to the bracket had a bit of play in it due to a two piece mounting system. While riding however, this did not cause the light beam to bounce around.

The lights themselves are incredibly valuable for the price point. These lights not only do the job that they’re supposed to but do it well. The mounting brackets are their weak point but if you know this and you’re careful, you shouldn’t have to worry.

These lights have great functionality in that they can be used across spectrum’s from riding the road to commuting. They could be used mountain biking but because of the limits of the front mounting bracket, it may not stay in place on particularly bumpy trails. If you are doing some serious night riding you may like a few more lumens. Being able to easily recharge the headlight is not only easy but will save you in constantly having to buy new batteries. The rear light is small enough that the non-rechargeable batteries shouldn’t need to be replaced very often and when you do, it’s easy.

The lights themselves are particularly durable being encased in aluminum while having rubber gaskets to keep them waterproof. What isn’t durable however is the mounting bracket particularly on the front light. With the proper care you could be sure not to brake it but if something were to brake on these lights, this would be it.

You can purchase the Allen Sports Light – 5X-R Bike Light Set at this link.

An Update After Rugged Use

As stated originally, the lights themselves are durable and long lasting. The mounts however, particularly the front, are not. The plastic mount going around the handlebars broke which was a concern originally. In addition, the mount holding the light to the plastic piece that goes around the handlebars broke after hitting a large bump due to the heaviness of the light. The light however survived nicely after a couple of tumbles down the road.

The rear light and mount however are a different story. It has been mounted on the rear seat stay of my ‘cross bike for the past few months which included rides ranging from smooth roads, to gnarly dirt roads, to trails that were way to rocky and bumpy for a ‘cross bike but the light had zero issues. The original batteries are also still going strong. So in final, buy this light for rear light and mount and the front light for a nice rechargeable flashlight. Get another front light for your handlebars that you can rely on.