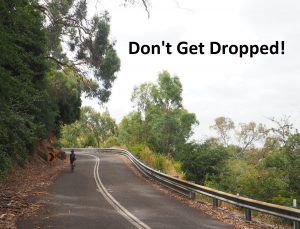 It never feels good to get dropped. The 1, 2, or 3-minute high intensity efforts always feel the hardest as you’re stomping up a climb, or trying to follow the wheel of an attack. But the issue might be more with the 10, 20, or 30-minutes before you got dropped if you were riding too far above your Aerobic threshold. The counter-intuitive answer to being able to ride harder, can sometimes be to ride easier.

We’re not talking Functional Threshold Power (FTP) here, but a similar threshold at lower intensity that is arguably just as important. Training terms can be confusingly similar.

Your Aerobic Threshold is the highest point at which you’re primarily using your aerobic energy system. It uses Oxygen to generate power without accumulating any lactate byproduct that results in rapid fatigue. Most riding depends on Aerobic Metabolism for low intensity, long duration power. You should feel like you can sustain the workload for a few hours.

The threshold between these two metabolic energy systems doesn’t act like a light switch, either on or off. Instead both energy systems work in coordination to meet the required power output at any given moment. So although you’ll always be using some amount of anaerobic energy, if you can ride under your aerobic threshold, you’ll be able to save your anaerobic energy reserves for high intensity efforts when they are required.

If the pace of the group is above your aerobic threshold, you’ll need to recruit more and more anaerobic energy just to keep up. You might be able to keep in touch with the group for a while, until someone attacks or you hit a climb. Then you’ll try to reach deeper into your anaerobic reserves, which will have been slowly depleting over time. You’ll feel like you’re dead in the water as you search for power that your legs just don’t have!

Set your Sights on the Long Term

It can feel counter-intuitive to focus more on your lower intensity aerobic endurance if you’re getting dropped by high intensity anaerobic efforts. However cycling is an endurance sport, and performance depends on endurance fitness and aerobic metabolism. Aerobic threshold is just as important as lactate threshold (FTP). Improving your aerobic fitness is a long-term project and can initially feel slow, but when training adaptations begin to accumulate, the payoff is that you’ll have more energy left to win the sign-post sprint, attack the climb, or spend more time at the front working for your teammates!