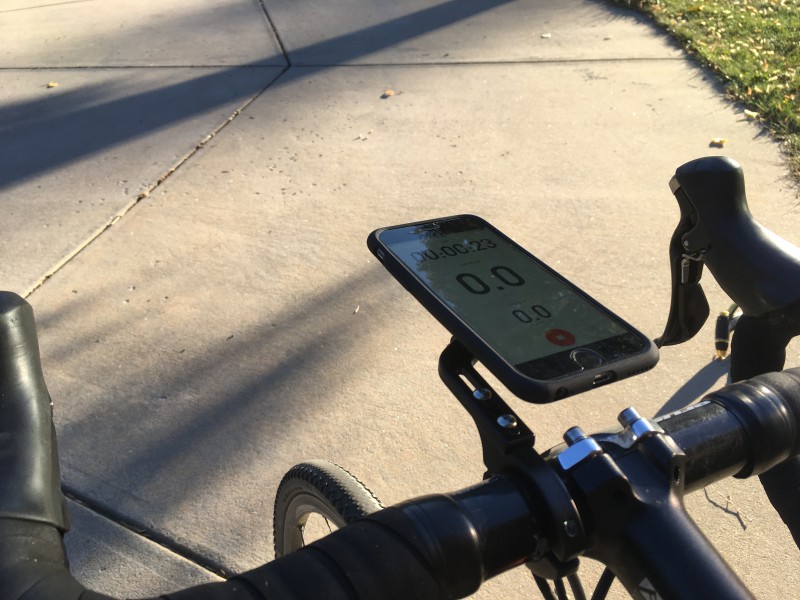 You go pretty much everywhere with your phone be it the grocery store, work, or on your ride. There are a lot of cycling apps out there that you can use during a ride. Strava anyone? How about a map when you’re exploring new roads or trails? So why not make use of your phone during a ride? Digging your phone out of your pocket can be cumbersome not to mention dangerous at times. This on top of your phone having the capability to operate as a cycling computer giving you real-time data, and more than just your speed and time ridden, are reason enough to have a handlebar phone mount.

Having the Need to See Who’s Calling/Texting/Emailing…

Additionally, you probably get the text from the significant other about when you’ll be home or from your friends about going out later. How about the unexpected call that could be work that can’t wait, or parents who can wait. Knowing right away whether it’s something you need need to pull over and take care of or if you can keep riding and get to it later is super convenient and saves you from having to reach back frantically and pull your phone out of your pocket. Having it right there in front of you solves these problems.

With a handlebar phone mount however, your phone is out in the elements and in an exposed spot to fall and break be it on bumpy roads or trails or in the event of a crash. Having your phone securely mounted with a reliable piece of equipment is extremely important. After all, smart phones aren’t exactly cheap. Here we review the Tigra Sport Handlebar Phone Mount and see if it’s up for this rather large job.

What is The Tigra Sport Handlebar Phone Mount? 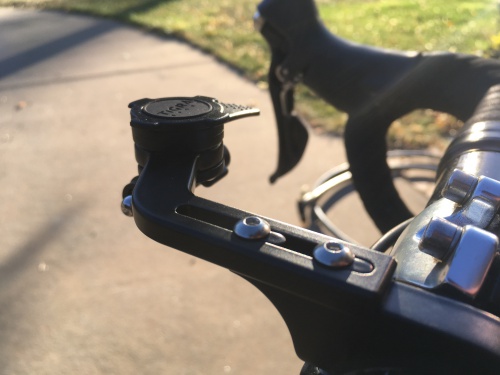 This handlebar phone mount is a two part system to mount your phone. The first is the mount of which ours was the Mount Case Bike Forward Mount. They have a number of different types of mounts depending upon your setup and desire. This mount is made from aluminum and is quite sturdy. The second part is the case that your phone is in. This isn’t similar to your standard, durable smartphone case, but rather is a durable smartphone case, just with an elevated section of material on the back of which the mount attaches to. 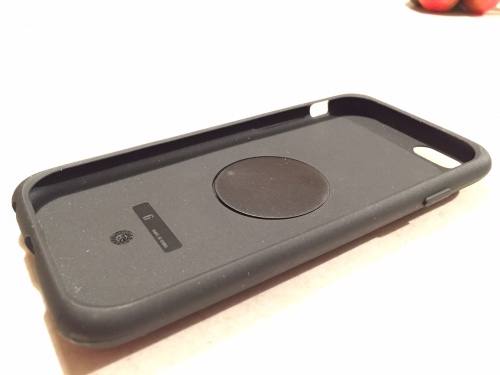 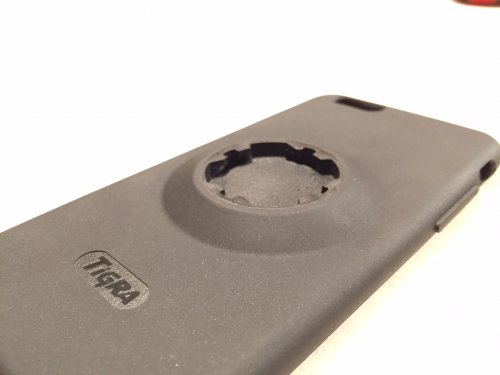 How the Mount Attaches to the Bars

The mount first attaches to your handlebars with an aluminum backing that is bolted on with two small bolts with allen heads; much like clip-on aerobars if you are familiar with them. The mount comes with multiple rubber strips preformed to go between your handlebars of any diameter, and the mount to prevent slipage as well as to ensure that it’s tight on the bars. Two more small bolts then attach the piece that contains the attachment points for the phone as well as a camera mount beneath. The four bolts do seem a bit small and like they would be a pain to install but in-fact it was simple and straightforward. 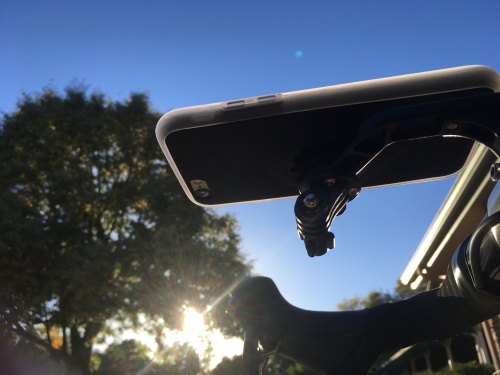 How Your Phone Attaches to the Mount

The phone itself is not actually attached to the mount but rather is in a case designed specifically for it. Tigra Sport makes mount cases for practically every smartphone. (I’m a bike expert not a phone expert but clicking around their website it seemed like they had every type of phone covered.) Our mount case was for the iPhone 6 and it fit snug, like any phone case would. It is also quite sleek and if you can deal with the thicker material in the center, on the back in your day-to-day life, it can be an everyday phone case.

This mount case then rotates and clicks in to the mount itself, much like a Garmin mount or any other computer mount, except this one is a bit bigger and a bit more secure. To remove the phone from the mount, you can’t just rotate it. You have to press down on a little tab and then rotate it. This seems like the ticket to keeping the phone mounted no matter what.

This handlebar phone mount is quite secure on the bars. There is virtually no play or movement in the mount itself and only a little bit in the phone case to mount connection but not enough that it would go anywhere. (Upon first testing this product I didn’t want to risk doing much of a ride and breaking my phone if the mount were to fail so was quite hesitant but once I saw how secure the phone actually was I knew I didn’t have to worry.) If you were to apply abrupt, direct force to the phone, say in a crash, the system would fail at the point where the phone case clips into the mount itself. For this to happen, it would have to be in a crash as simply riding down a crazy rough road or rocky trail would not apply enough direct force to the phone. For the phone to come out of the case it’s in; it simply won’t happen because of the weight of the phone and how tightly the case is on it.

The Tigra Sport Handlebar Phone Mount is quite simple but also functional for what you want to do with it. The mount attaches to your handlebars just to the left of the stem which is the only option if you want the mount out ahead of your bars, otherwise you can pace it on the other side to have the phone just above your stem. Either position puts the phone in the best place to use yet still be out of the way. You can angle the mount so that phone faces more up to you or so it lies flat and is more aerodynamic. With its sleek turn and lock attachment system, it can also rotate so the phone is horizontal to you. This is a great option if you’re riding the trainer or rollers in the winter and want to watch a movie. 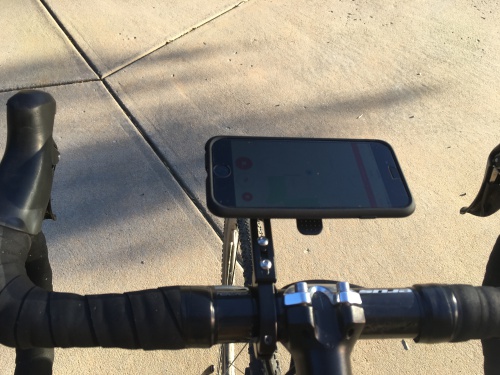 For anything to be functional on a bike, it must stand up in all weather. The mount will easily but your phone on the other hand… The case comes with a cover that snaps over the front of the phone which wouldn’t be 100% waterproof, say dropping it in a lake, but if you were to get caught in the rain, the cover would keep your phone dry. They have small removable covers for the power cord and earphone jack that simply rotate out and stay attached so you don’t loose them. The one big drawback with the cover is that it makes it very difficult to use your phone as it doesn’t provide good contact with the screen to be able to swipe, type, anything really. (note: I do have a glass screen protector on my phone so both of them may be the reason why it doesn’t work.) You can see fine through the screen protector which seemed like it would be an issue before it was on the phone. 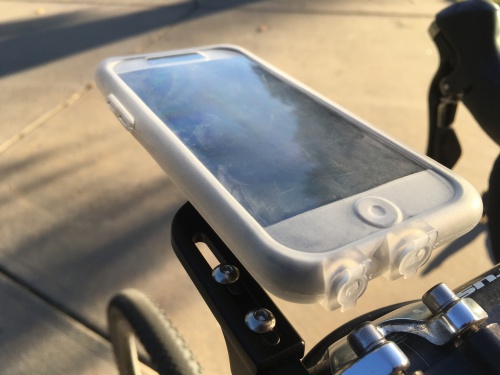 This is a pretty sweet handlebar phone mount. Simply, it keeps your phone secure on your bars, priority number one, and has the functionality to be able to be positioned almost any way you like. Additionally, having the option to attach a camera, say a GoPro, to the bottom of the mount is pretty sleek. The biggest drawback is the screen protector being too thick or made of poorly conducting plastic for you to be able to utilize the screen. You don’t have to ride with it on however and can just leave it in your pocket just in case the rain comes.