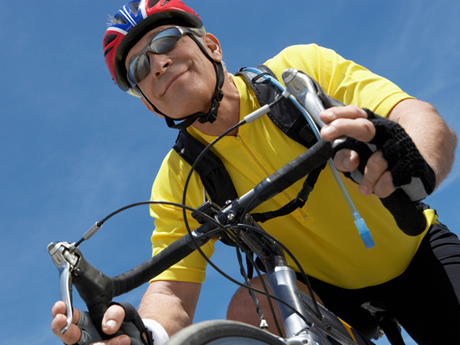 Science and the public in general regard older cyclists as models of exemplary ageing. It’s because they demonstrate what a difference a cycling lifestyle makes. Instead of relying on a multitude of drugs for high blood pressure, diabetes, obesity, cardiovascular disease, and other ailments, they get on their bicycles. Here are 10 ways cycling and your body change when cycling over 40.

Cycling over 40 isn’t a secret science. The body is well trainable at older ages. You can start cycling at 50, 60, or beyond. From a medical standpoint there is no age limit for cycling. Forty-year-old-plus riders are more common than ever and cycling over 40 is not that much different from cycling over 20, albeit there are subtle changes.

Reaching 40 is not traumatic from a cycling performance standpoint. You’ll likely not suffer from it much at all if you’re already in good shape. Most of the reasons why you and your body change are simple things that you adapt to naturally.

Overconfidence is one of the main issues in 40-year old cyclists — because you still feel fine. But when you hit 40, no matter how good you feel, there’s really no excuse not get a routine check-up by a doctor. It should include an EKG and blood pressure check under load and a blood test. A heart ultra sonic test is also advisable. Once you have those under your belt and the go ahead from your doctor you’re ready to hit the road. But just remember — you’re not 25 years old anymore. Certain changes may not be that obvious.

Ten Ways Your Body Changes Over 40

Here are 10 different things that you may notice from both physiological and psychological standpoints, starting off with the physical aspects first.

If you’ve been riding for more than a few years, you’ll likely have a riding log with performance times. As your heart and circulatory system ages it naturally slows down. It might not be much but it’s noticeable at 40. This typically results in a gradual tapering off of your performance times. You won’t feel like running your cardiovascular system up to the high levels that you did when you were 25.  Recognize it for what it is and don’t let it bother you.

No 2: Take Longer to Warm Up

You can’t jump on your bike and blast off the line like you did at 20. Popping, creaking, and strains are more common in joints and bones. It’s nothing to be overly concerned about though — just take more time warming up. If you’re experienced on the bike, your body should tell you when it’s ready to sprint or climb.

No. 3: Take Longer to Recover

You may have needed little recovery time after a ride at 25. But over 40 you may need to recharge after a long or hard ride. If you give yourself more recovery time between sessions, it will improve the quality of the next session. Not recovering properly can enhance the risk of injury. In addition, make sure you get enough sleep. This is a vital part of the recovery process. You can’t stay up all night anymore.

Your bladder is not what it used to be. You need to stop and pee more often cycling over 40 and it’s harder to empty your bladder completely. It’s more of an issue for men because of prostate aging but it’s not such a big issue. Just plan around it. You’ll likely stop more often for refreshments anyway because you’re just enjoying the ride more, and more refreshments equals more voiding. What goes in, must come out.

No. 5: Eating and Drinking Habits

Dietary needs do not change significantly when over 40 but maintaining a healthful diet becomes even more important to overall well-being and athletic performance. Chips, candy, and ice cream may not be as palatable as it once was. Nutrition and hydration during exercise is vital for better performance and avoiding fatigue, particularly for the over 40 cyclist.

Psychologist William James sums it up like this: “As we age, time seems to speed up because adulthood is accompanied by fewer and fewer memorable events. After 40, you’ll likely notice that the weeks, days, and months zip past at a frighteningly faster rate than they did at 20. It’s accompanied by the notion that you can’t, or don’t have the time left to accomplish all of your goals.

Hitting 40 may make you notice that your internal, biological clock has slowed slightly. It’s due in part because your relation to unstoppable clocks and calendars may have become more relevant and external time suddenly appears to pass more quickly. Looking at it from a time perspective, longer rides can actually seem shorter, if that makes any sense.

The pressure on your available time seems to increase when cycling over 40. It can sometimes be hard to find the time for a decent ride. This makes you appreciate the time you have on the bike that much more. A full week working can leave you with precious little ride time, particularly in winter, and the time you do have in the week often finds you worn out from life and work. The time spent on your bike feel like unbridled freedom and you come back from a ride feeling mentally renewed.

The harsh reality is, you’re likely never going to win big at 40 years old. The oldest riders in the Tour de France tend to be in their mid- thirties and they typically do fine but unless you’re a prime example of a professional cyclist, the dreams of winning big should be put into perspective. But you don’t have to let that stop you from chasing down any youngster that dares to ride past you.

Keeping up with technology can be a misplaced characteristic. Things that still seem new to you are old-school. Fiddling with electronic gizmos is only counterproductive to you and can seem like a waste of good riding time. That fancy bike computer or phone that can do everything except wash the dishes is not that attractive to the over 40 cyclist.

One big advantage — you’re probably riding the bike you always wanted because you can afford to do so.