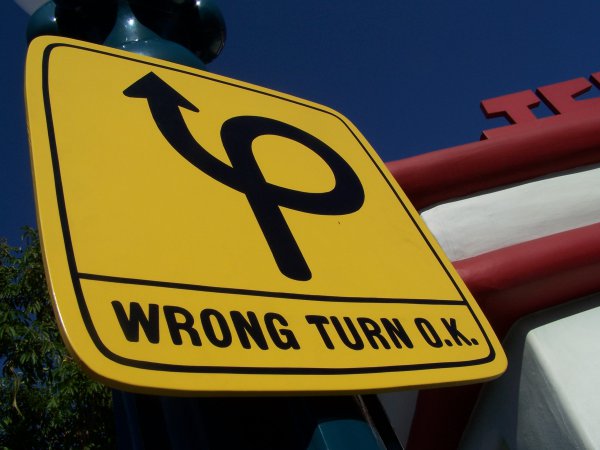 It’s a newbie mistake that can get you hit by a car; the assumption that cars can see you. There are few things in life that you should assume without verification, your visibility on a bicycle is not one of them. Always ride like you’re invisible.

Constantly be aware of traffic coming up from behind by checking over your shoulder and listening. It’s not always possible to monitor your surroundings 360-degrees but do your best. If possible, make eye contact before making any sudden moves if possible, particularly across intersections.

Take steps to increase the probability that motorists see you by wearing bright colored clothing during the day, and lights at night…..More on fashion later.

Everyone has seen it; newbies riding peacefully down the wrong side of the road opposite the flow of traffic. This is wrong for two reasons:

One: you could be hit by a car on the same road coming at you from straight ahead of you. Cars have less time to react when they see you and can’t take take evasive action because they’re approaching you faster than normal because you’re going towards them rather than away from them. Also, if you do happen to get hit, the forces are greater because it is two objects traveling toward each other rather than both in the same direction at differing speeds.

Two: Cars turning from an intersection are not looking for traffic — you on a bike — coming from the wrong direction. They will turn right into you.

Newbies often ride very close to the curb because they’re worried about being hit from behind. But if you take a look at where the car is, you’ll see that the driver is looking down the road for traffic. They’re not looking in the bike lane or the area closest to the curb. Drivers typically look down the middle of the lane for other cars.  The farther left you are the more likely the driver will see you.

If you’re new to cycling, move to the left. Stats support the concept and say that you’re far more likely to get hit by a car coming at you in an intersection than a car from behind which can see you more clearly.

#4 – Group Ride Without a Clue

Learning to ride in close proximity to other riders takes practice. You’re in trouble from the start if you attempt a group ride without first knowing what’s expected of you. Newbies who don’t know the drill put the whole group in danger. They may not know the gentle buzzing of your front tire into someone’s rear tire can cause both of you to go down hard, not to mention the riders behind you as well.

Ride with a few experienced friends to get the feel for it ahead of time. Talk to them and have them tell you what to do and not to do with just the few of you. Have them teach you how a paceline works and what all is expected of you. Don’t tag along on a multi-person group ride until you’ve got the basics of group etiquette down.

#5 – Starting Out Too Aggressive

Newbies sometimes decide to tackle 30 or 40 miles on the first day. As with any new form of exercise, you need to ease into cycling. Chances are that you can make a longer ride, but the crippling, unexpected soreness can discourage you from cycling altogether, or worse, It can lead to injuries.

Start small. Bike 1 or 2 days a week for a few miles, maybe even ten. A good indicator is when you realize that your rear-end isn’t sore.

Nobody likes a show-off. Even if you have a moderate or high level of fitness, hot-rodding is a no-no. It’s a newbie mistake that shows a lack of confidence in your own ability — and it doesn’t fool anyone. A good example is the newbie who takes both hands off of the handlebars at the same time. This show-off gesture is only appropriate for pros when they win the big race — and it gets them in trouble at times.

Keep two hands on the bars at all times. Ride with respect to the environment, other cyclists, pedestrians, and motorists.

Wearing pants is common among commuters and newbie cyclists. Don’t do it without restraining your pants legs with a pants band or don’t wear pants at all. Cyclists have plenty of horror stories about catching a pant leg in a chain or chainring. It doesn’t have to happen that way.

Embrace Lycra. Lycra is tight, it’s designed to be slick enough to allow you to be comfortable on the seat and with the pedaling motion without your shorts or pants catching on your knees. T-shirts are another item to discard for riding. Jerseys are made with an athletic material and are light, airy, with pockets for everything. Get the right gear.

Almost all newbie cyclists do this one; wearing underwear under Lycra shorts. It might be considered uncouth to skip the underwear, but underwear bunches up under cycling shorts and can really cause you pain. Lycra is designed to be worn without underwear.

Just do it. You’ll never understand how comfortable Lycra is by itself until you try it.

Newbies might not care about cycling fashion but that doesn’t mean that they should ignore the rules of road cycling fashion.  These are rules that you can only learn through time spent around other cyclists, or by getting on first-name terms with the staff at the local bike shop of course.

Socks that cover most of your calf just look stupid when riding a road bike. Cyclists of all kinds wear short socks only. When your calves start to bulge, you’ll want to show them off. Wear short socks.

Newbie mountain bikers who might have crossed over to road biking might still be thinking that it’s fine to keep wearing baggy shorts. It looks funny, like you grabbed the wrong bike. While baggy shorts are perfectly acceptable for off-road riding, the exact opposite is true for road riding.

#10 – Not Wearing a Helmet – The Biggest of Cycling Mistakes

A lot of the time cyclists will see what other riders are doing and try to emulate it because it looks cool. In some cases this is OK, such as adopting a bright colored sock, saddle, and handlebar tape combo, but one thing you should never adopt is riding without a helmet. Riders will do this because they think it looks cool but you should always wear a helmet, even if it’s just down the street to the grocery store quick. You never know when something might happen and being seen without a helmet on just makes you look stupid. Wear one. Always. It will save your life.