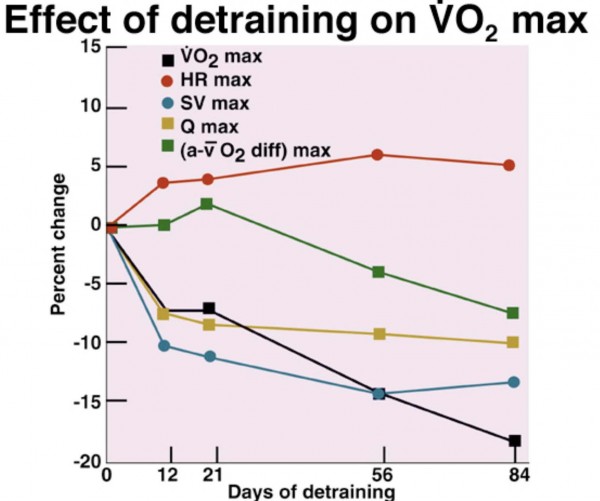 Detraining is a fancy word for losing fitness, a scientific term for doing nothing. Also known as deconditioning, it happens when you slack off. How fast it happens depends on how fit you are, what level you are cycling, your age, your diet, and what other activities you are doing.

It might be because you get sick. It might happen because your job gets in the way. It might be that you’re suffering from a lack of motivation, emotional issues or an accident. Then there’s the weather. Unless you like riding in wet conditions, it’s going to keep you off your bike. Icy or snowy roads can be downright dangerous. If that weren’t enough, winter is the time of year when upper respiratory tract infections such as coughs, sore throats, colds and flue tend to be everywhere.

Detraining is not planned rest periods from higher riding intensity and volume. Detraining is the unplanned 3 day, 5 day, 10 day periods or even longer when you can’t, or don’t train.

Physiological changes take place when you stop cycling. You begin to lose cardiovascular gains; your heart’s ability to pump blood as efficiently drops. Your muscles capacity to process oxygen drops off and your body’s enhanced ability to use carbs for fuel begins to fade. Also disappearing are hard-earned improvements in blood pressure, blood cholesterol, and your blood sugar levels also start to rise. When you stop cycling on a regular basis,  you also lose gains in muscle fiber and size.

You have a safe period of about four days with no large detraining consequences. After that the detraining effect hits surprisingly fast.

Your fitness has already begun to decline after three days off the bike, however, the losses at this stage are very small. If you had been training hard prior to the last three days, this small break may even enhance your cycling fitness because of beneficial rest. During the recovery phase your muscles have time to recover fully, muscle carbohydrate stores become topped off, and damaged muscle fibers have time to repair themselves.

Changes really begin to occur after one week out of the saddle and result in fitness losses. Aerobic capabilities drop off by about 5 percent. Your blood volume can be reduced by five to twelve percent.  This means a decrease in the amount of blood your heart can pump in terms of the amount of blood pumped per beat and total blood volume per minute. Your muscles also begin to lose elasticity.

Performance in endurance and fatigue are affected, specifically cardiovascular and muscular endurance. Your body’s ability to use oxygen, VO2 max, drops by four-to-ten percent in well-trained cyclists. Less oxygenated blood is pumped with each beat.

Maximal oxygen uptake, VO2 max, the prime measure of your aerobic fitness, will have declined from somewhere between four to twenty percent. Part of it stems from reduced cardiac output in that the muscle mass in the pumping chambers of the heart can decrease by almost 20 percent after three weeks of inactivity.

Substantial alterations are taking place in your muscle biochemistry after one month. All of the detraining changes outlined above now continue to get worse and changes in muscle are now becoming prominent. By now, your muscle capillarisation will have returned to your pre-training baseline.

Your heart is noticeably less muscular after two months of inactivity. The thickness of the muscle walls that comprise the pumping chambers is reduced by as much as twenty-five percent. The muscle mitochondria, the power producers, are also becoming less efficient at using oxygen to produce energy in your muscles. This efficiency can decline by twenty-five to forty-five percent up to twelve weeks after you quit riding your bike.

There’s surprisingly little published data or research on the actual fitness losses during an extended period of detraining. The lack of data is to be expected as it’s very difficult to recruit a group of cyclists who take training seriously, and then ask them to stop training for a month or more while their hard-earned fitness ebbs away.

So, how long will it take you to regain your level of fitness when you start cycling again? It’s hard to predict for each individual but after a three-month hiatus, a week or two of training will not return you to your peak condition. The sad part is, if your layoff was long, it may take you nearly as long to retrain as it did to become fit initially. It will be a bit abbreviated as your body already has been accustomed to that level of fitness so getting back to there is slightly easier.

If you’re forced to abandon your normal cycling routine for more than two weeks, attempt an abridged cycling schedule, even if it’s one ride per week, rather than stopping altogether. If you don’t have time for a good ride, you can break it up into several shorter rides. One option is to do two or three short sessions a week of high-intensity interval training. One-minute sprints of cycling, alternating with one-minute rests for a total of 10 minutes. Research shows that this can be a good way to maintain aerobic fitness, without significant detraining effects.

Anything is Better Than Nothing

If you have stopped exercising because of an injury, such as a broken bone or ruptured tendon, you can slow the detraining effect by working unaffected muscle groups, such as exercising the opposite arm or leg. Anything is better than nothing. Be safe out there and stay on your bike if at all possible.