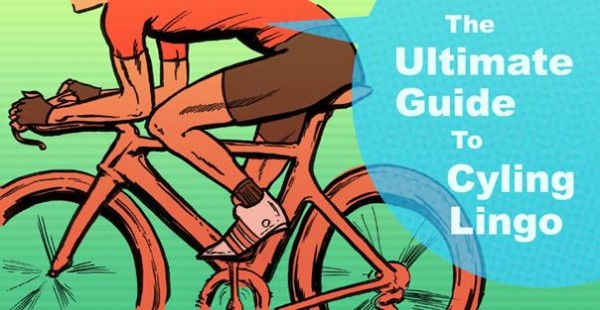 So you want to be a cyclist? Then you should probably learn how to speak like a cyclist. Here are some terms you may come across while reading cycling blogs or speaking to your fellow cyclists outside of the normal mechanical jargon.

This is most commonly a racing term that means you quickly accelerate with the idea that you’re going to put a gap between you and other riders.

Similar to attack, breakaway means that you or a small group split off from the front of a larger group and move ahead, leaving a sizable gap behind you.

This is a French word that refers to a line of riders who are trying to hit maximum drafting speed in a cross wind. This results in a diagonal line across the track.

Another French word, a peloton is a large group of cyclists that totals more than twenty riders.

6. Keep The Rubber On The Road

The equivalent to the theater world’s: Break a leg! It means, “Have a good ride! Don’t crash!”

A term for anything that feels off while you’re riding. This includes mechanical failure or a riding partner’s bad mood.

This comes from bike shop humour and means “Just Riding Along”. As in, “I was just riding along and I crashed into a tree and the whole bike fell apart!” How many stories do you think bike repair people hear that start with JRA?

This is when you run out of fuel and your blood sugar becomes incredibly low. There is no more fuel for your brain, muscles, and heart. Besides being dangerous, it makes you feel like $#!%.

This is caused by crashing. Road rash occurs when your skin slides across the asphalt leaving you with mild to severe skin abrasions.

This is leg-to-seat chaffing. They usually appear in the nether regions and can really hurt.

This is slang for a bike crash.

This is when a cyclist flips over their handlebars during a crash. As in, “End over end.”

This isn’t actually a vitamin, just called one because cyclists use it so much. It’s Ibuprofen.

This is the speed of spinning your pedals. Cadence is measured in revolutions per minute (RPM) and is often a focal point for improving cycling performance.

This is a measure of power. Watts are used to find out how much power a cyclist produces.

This is what a lot of cyclists call their bikes. It’s a nod to horseback riding lingo.

Sometimes called the clunker, this is not the go-to bike but the back-up bike. Usually old and a little out of tune, the beater bike is for lackadaisical days and getting from point A to point B.

This is your padded cycling shorts. They reduce chafing, blisters, and saddle sores.

This is a reference to cyclists who wear matchy-matchy outfits. Everything is designed to go together from the jersey to the shorts and sometimes even the socks.

There are only three Grand Tours in the world: Tour de France, Giro d’Italia, and Vuelta a Espa᷈na. They are all three week long stage races for professionals. A lot of people either watch them or pretend to.

Other sports call these people rookies. A Neo-Pro is a first year professional cyclist.

This is slang for a road biker. Roadies are very devoted to road cycling, racing, and generally everything about the sport. They have facts and figures that other people just don’t have.

This is someone who has high cadence in a low gear. This person “spins” very light and easy and has to rely on RPMs for speed. The more RPMs they manage the faster they can go.

The exact opposite of a spinner, they push pedals slowly in large gears. There’s usually a lot of resistance here which makes people think it’s more productive, while spinning is actually more efficient.

This is a term reserved for large riders (not fat, just big). Clydesdale usually applies to riders who weigh two hundred pounds or more.

A common set of nicknames for people who are brand new to cycling.

So there’s your start to learning how to speak like a cyclist. What’s the most interesting term you can think of? What terms are we missing? Let us know in the comments section below!