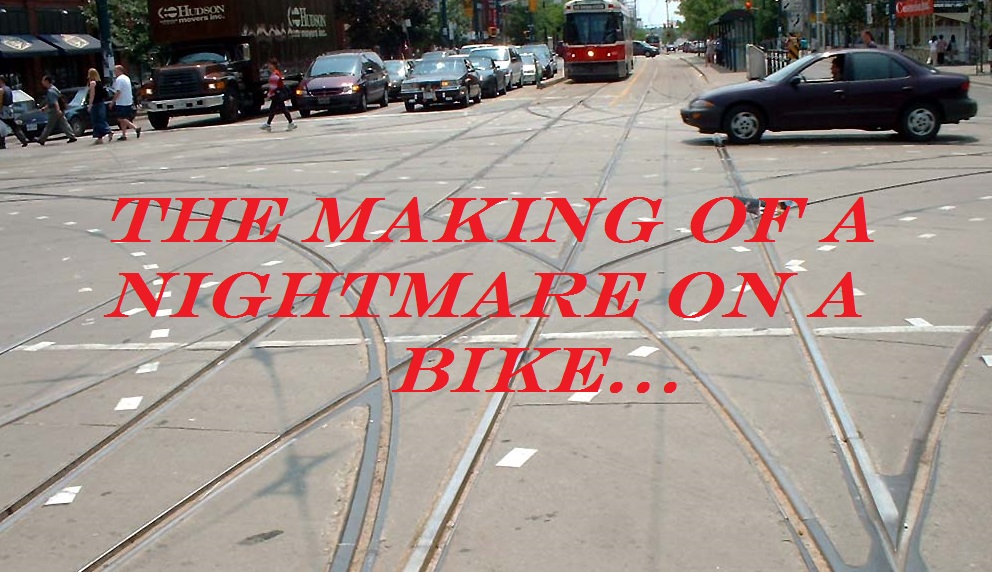 Railroad tracks can be one of the most difficult things to learn to maneuver on a bike. If you occasionally cross railroad tracks on a bike, chances are that you’ve crashed on a set before. It is very easy to do especially if they’re wet. Even experienced riders crash on them but you don’t have to if you know what to do.

The Dangers of Crossing Railroad Tracks

Railroad tracks are dangerous to cross on a bike for a few reasons. The largest one is that when they are wet, they are as slick as ice. If they’re even at a slight angle, your bike is not straight up and down while crossing, or you try to accelerate or brake, you are very likely to have your wheels slide out from under you. The thing with all of these scenarios as well is that it happens very fast and the next thing you know you’re sitting on the ground. Another danger is getting your tires sucked into the crack which can cause a nasty fall. This occurs more often when the tracks are running with you such as with a trolley line.

When Tracks Are Perpendicular 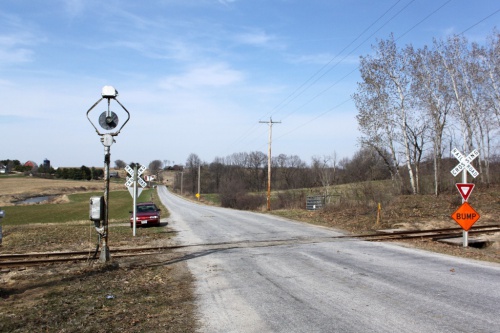 The easiest type of railroad tracks to cross on a bike are ones that are perpendicular to you as you cross them. (like the image above) When crossing any set of tracks, do not turn your front wheel. Keep it straight with a firm grasp so your handlebars don’t turn on you when you hit the bumps. When crossing perpendicular tracks, slow a bit and lift your butt slightly off the saddle to absorb the bumps. Also, stop pedaling and coast over keeping your bike straight up and down. A lot of these railroad track crossings can be old and can easily cause a flat tire from the rail or supporting wood, metal, or concrete structure. Taking your butt off the saddle and absorbing any bumps with your legs and arms will help avoid flatting. Another alternative to crossing railroad tracks on a bike is to bunny hop over them. With this you won’t need very much height but you will need speed as the distance to stay in the air is quite large. Also if you don’t make it all the way and your rear wheel comes down on the track, it can very easily puncture.

When Tracks Are at an Angle 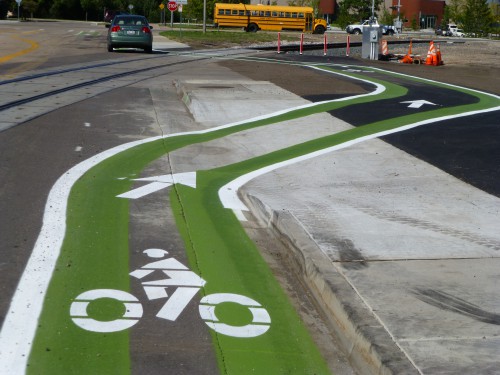 This type of crossing is likely the type that may have brought you down on a bike. If you were to try and ride across them at an angle, particularly while wet, the wheel will be in contact with the track for longer which combined with the track going in your direction of travel, will cause your wheels to easily slide out. There are three ways to cross these types of crossings with the first one being your standard go-to.

The first, and safest way, to cross angled railroad tracks is to not cross them at an angle. Simply ride further to the right or left so you can approach them at a 90 degree angle. Then cross them as you would a normal set of tracks perpendicular to you. The one thing to watch for here is that there is no traffic coming up behind you as depending upon the road, you could be in the center of the lane. Most drivers typically recognize the danger you are in and what you are trying to do so will give you space. Don’t count on it though so ride defensively.

If you are a much more experienced bike rider and you can’t ride wide to cross the tracks at a 90 degree angle and don’t want to slow down, you can employ the double hop. You need to slow down a little bit to give enough time in-between the tracks. What you do is as your front wheel approaches the first track, lift it off the ground slightly so it doesn’t touch the track. As it’s coming back down, lift your rear wheel over the first track but while doing so you will have to lift your front wheel over the second track. And then again, as your front wheel is coming down, lift your back wheel over the second track. You have to be very quick to do this and the slight angle of the track gives you a bit more space in-between the tracks to employ it. If the tracks are running even more parallel with you, it will be slightly easier although not hitting any of the tracks becomes even more important. As the tracks come closer to perpendicular, it can be very difficult to not hit one of the rails.

If you have the speed and skill, the best way to avoid crashing on railroad tracks is to simply not even touch them. Just air it out. This can be somewhat easier on perpendicular tracks but as the tracks turn at an angle, the distance you need to go increases so it can be hard to make it all the way. In particular, if you try to bunny hop over angled tracks, especially if they’re wet, and you have your rear wheel come down on the last track, you are very likely to crash.

When Tracks Run with you – Ie. Trolley Tracks 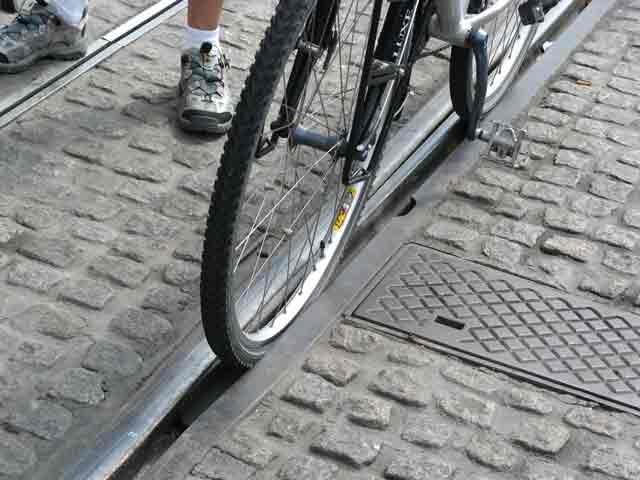 In some cities, particularly in Europe, you will encounter trolley tracks that run parallel with you down the street. These can be a nightmare if you don’t know how to handle them as not only do you have navigate the parallel tracks, you have to navigate the above scenarios as well when you come to intersections. The best rule to avoid crashing is to simply only ever cross tracks at a 90 degree angle. If you find yourself trapped, simply stop and put a foot down to get over them safely. It can be quite embarrassing to crash on these because there are often a lot of people around in a city where these are located. If you are a more experienced rider and are riding clip-less pedals, you can employ two different techniques to move laterally over parallel tracks.

The first one is to be used when you are riding a bit slower. First, lift your front wheel off the ground and move it laterally over the track. Make sure you get it high enough as if you don’t and it catches on the track, it can bring you down. As soon as the front wheel comes back to the ground, do the same with the rear wheel. A good way to practice this is to go to an empty parking lot and practice it over the parking lines that way you don’t have to risk crashing if you don’t get it the first time.

The second way to move laterally over tracks is to bunny hop them laterally. This is for when you’re going a bit faster. It’s fairly close to the improvised double hop but while your front wheel is still in the air you bring your back wheel up. Again, a good way to practice this is in an empty parking lot over the parking lines.

Slowing Down To Cross Railroad Tracks on a Bike

The simplest, most effective way to stay safe while you cross railroad tracks on a bike is to cross them slowly. This gives you time to approach them at a 90 degree angle, unless you’re an expert and employing one of the other above techniques, and if you do happen to fall, you are not going very quickly. If you are still not comfortable crossing railroad tracks, even at a 90 degree angle, it’s okay to stop and get off your bike and cross them on foot. It’s always better than crashing. Happy crossing.